What is the difference between QCM-D and traditional QCM?

The Quartz Crystal Microbalance with Dissipation monitoring (QCM-D) technology measures the frequency and dissipation of the freely oscillating quartz crystal after excitation. As opposed to ordinary QCM, the QCM-D determines the dissipation factor, providing information about conformational changes and softness/rigidity (viscoelasticity) of the molecules studied. The major benefits with this procedure compared to other QCMs are:

The dissipation (damping) is the sum of all energy losses in the system per oscillation cycle. It is defined as: 1/Q, where ‘Q’ is the quality factor of the oscillator. It can also be defined as the energy dissipated per oscillation, divided by the total energy stored in the system. With QCM-D, the dissipation factor is measured every time the drive generator output is stopped and the sensor oscillation starts to decay exponentially. A soft film attached to the quartz crystal is deformed during oscillation, which gives high dissipation. In contrast, a rigid material follows the crystal oscillation without deformation and consequently gives low dissipation.

Why is it important to measure the energy dissipation?

The frequency response of a quartz crystal represents the change of total mass in the measurement. This mass always includes a certain amount of water. However, the proportion of water may vary between 10% and 90% depending on the type of molecule and the way it adsorbs to the surface (an elongated protein that adsorbs flat on the surface gives low dissipation while the same molecule standing up on the surface gives high dissipation). By measuring the dissipation, it is possible to determine if a soft film (water rich) or a rigid film (less water) has formed on the surface. The Sauerbrey relation gives a good estimation of adsorbed mass only when the film is fairly rigid. Measuring the dissipation means that it is possible to determine whether the Sauerbrey relation is valid. The dissipation factor gives additional ‘structural’ information, compared to an ordinary QCM measurement, in that one can measure the conformational change of the film, e.g., crosslinking (collapse) and swelling.

How is the sensitivity distributed over the crystal surface?

The sensitivity of the sensor is highest in its center, and decreases towards the sensor edge. When calculating mass and viscoelastic properties of an adsorbed layer, the software QSense Dfind assumes that the surface has been homogeneously coated, and so the result is always an average of, for instance, mass per area unit. In other words, it is not relevant to talk about sensitivity or results of specific regions of the sensor surface, and any approach to partially cover the sensor is therefore not recommended. The decrease in sensitivity towards the edge is illustrated in the image below. 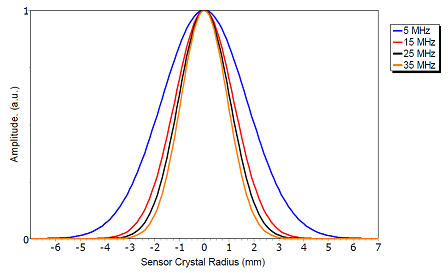 What is the difference between QCM-D and SPR measurements?

The ability to evaluate kinetics is quite similar in both systems from a technical point of view, but there are major differences in sensitivity. QCM-D systems are more sensitive for water-rich and extended layers, while the SPR system is favored for compact and dense layers. QCM-D, being an acoustic technique, allows measurement of thicker films, while SPR, being an optical technique, has greater limitations concerning the film thickness.

The reason for this difference is due to the different physical principles by which the coupled mass is measured. The mass-uptake estimate from SPR data is based on the difference in refractive index between the adsorbed biomolecules and water displaced by the biomolecules upon adsorption. This means that water associated with the protein film (e.g., the hydration shell) is essentially not included in the mass determination. In contrast, changes in frequency acquired with QCM-D measure water coupled as an inherent mass via direct hydration, viscous drag and/or entrapment in cavities in the adsorbed film. The SPR response is therefore proportional to the coupled ‘molar mass’, while in QCM-D measurements the layer is essentially sensed as a ‘hydrogel’ composed of the macromolecules and coupled water.

However, while SPR measures one parameter only, the additional information contained in energy dissipation data from QCM-D enables a more detailed interpretation. Changes in the dissipation are related to the shear viscous losses induced by the adsorbed layers, and thus provide information that can help the identification of structural differences between different adsorbed systems, or structural changes in the same type of molecule during the adsorption process.