The Langmuir (L), Langmuir-Blodgett (LB) and Langmuir-Schaefer (LS) techniques enable fabrication and characterization of single molecule thick films with control over the packing density of molecules. LB technique is a key method in depositing nanoparticles with controlled packing density.

Langmuir, Langmuir-Blodgett, Langmuir-Schaefer — what is the difference? 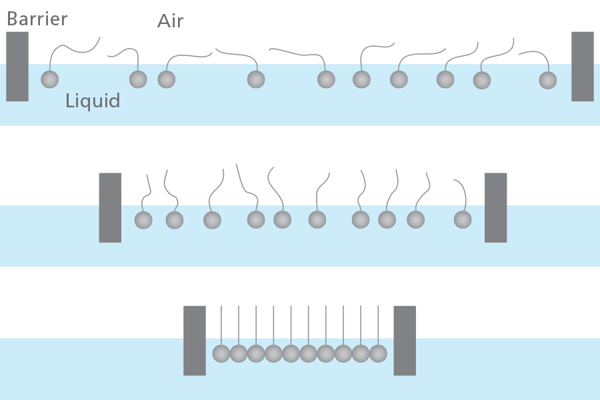 The components of L and LB troughs

Langmuir troughs include a set of barriers (2), a Langmuir trough top (3*) and a surface pressure sensor (4) as standard. The software-controlled barriers are placed at the interface and compress the monolayer. The trough top holds the liquid phase where monolayers are fabricated. The trough top is often made of hydrophobic material that improves sub-phase containment. The surface pressure sensor provides information about monolayer packing density.

For Langmuir-Schaefer deposition, the Langmuir-Blodgett trough top is not always necessary and can in some cases be replaced by a Langmuir trough top. 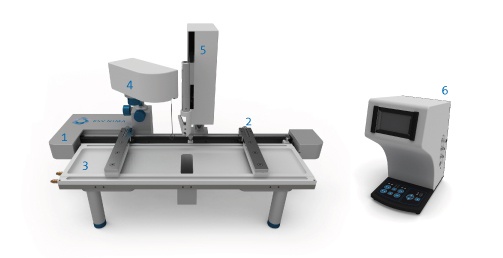 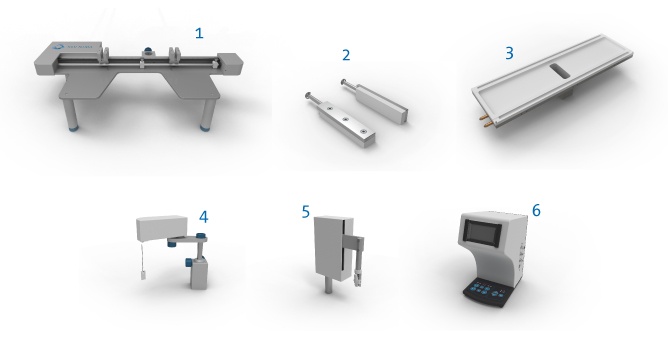 KSV NIMA troughs are built on a frame (1) that enables outstanding modularity; a Langmuir-Blodgett trough top can be easily switched with a Langmuir trough top. The dipping mechanism can also be added or removed for simple conversion between Langmuir and Langmuir-Blodgett configurations. All KSV NIMA troughs come with an interface unit (6) that controls the instrument and displays key parameters.

Prepare the amphiphile molecules that will create a monolayer in a water-insoluble solvent. The subphase, typically water, is held in the hydrophobic trough top that provides good subphase containment. When the amphiphile solution is deposited on the water surface with a microsyringe, the solution spreads rapidly to cover the available area. As the solvent evaporates, a monolayer forms at the air-water interface, and a Langmuir film is created. The software-controlled barriers located at the interface then compress the monolayer until the surface pressure sensor indicates maximum packing density.

A compressed, monolayer film can be considered as a two-dimensional solid with a surface area to volume ratio far above that of bulk materials. In these conditions, materials often yield fascinating new properties. Experimentation using Langmuir troughs enables inference and understanding about how particular molecules pack when confined in two dimensions. The surface pressure-area isotherm can also provide a measure of the average area per molecule and the compressibility of the monolayer. 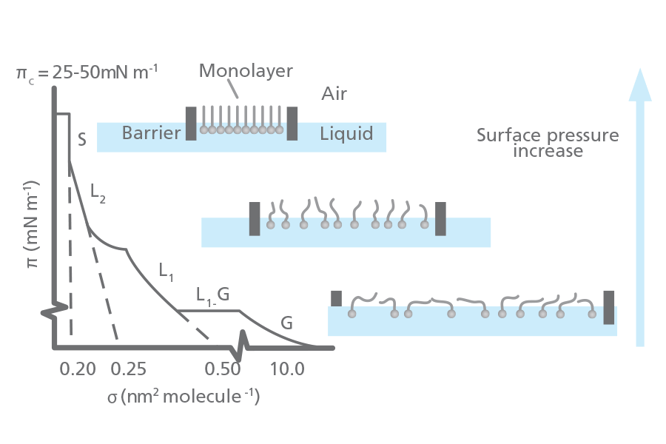 Surface pressure—area isotherms of a Langmuir film and molecules in different phases.

Langmuir films fabricated in a Langmuir trough can be studied by analyzing surface pressure isotherms, isochors, and other data measured with the trough or with a complementary characterization instrument.

Theory Note 1 — What and Why: Langmuir Films

The core of L and LB technology is in performing controlled LB deposition where Langmuir films are transferred to solid surfaces with preserved density, thickness and homogeneity of the sample. The capability is especially important when working with nanoparticles that are traditionally difficult to deposit in a controlled manner.

This allows not only considerable control of the coated layer properties but also the assembly of organized multilayer structures with varying layer compositions. Compared to other organic thin film deposition techniques, LB is less limited by the molecular structure of the functional molecule and is often the only technique that can be used for bottom-up assembly.

LB deposition is most often carried out in the "solid" phase where the surface pressure is high enough to ensure sufficient cohesion in the monolayer. This means that attraction between the molecules in the monolayer is sufficient to prevent the monolayer from falling apart during transfer to the solid substrate and ensures the buildup of homogeneous multilayers. Recently evidence has been presented that suggests a perfect deposition area is at the liquid-condensed section just before entering the solids phase. This will enable better mobility of the Langmuir layer in coating the substrate.

Monolayers can be held at a constant surface pressure by computer-controlled feedback between the surface pressure sensor and the compressing barriers. This is useful when producing LB films to guarantee the homogeneity of the film deposited.

In the case of Langmuir-Blodgett (LB) deposition, the solid substrate is dipped through the Langmuir film and extra space is required below the monolayer. It means the Langmuir film has to be fabricated with a LB-trough top with a sufficient well size for the substrate. The dipping mechanism holds the solid substrate and enables controlled deposition cycle(s). The Langmuir-Schaefer (LS) technique can be performed with a Langmuir trough top, as no additional depth is required below the monolayer.

Repeated deposition can be achieved to obtain well-organized multilayers on the solid substrate. LB and LS cycles can also be combined to obtain desired structures and thicknesses. The most common multilayer deposition is the Y-type multilayer, which is produced when the monolayer is deposited on the solid substrate in both the up and down directions. When the monolayer is deposited only in the up or down direction the multilayer structure is called either Z-type or X-type. Intermediate structures are sometimes observed for some LB multilayers and they are often referred to as XY-type multilayers. 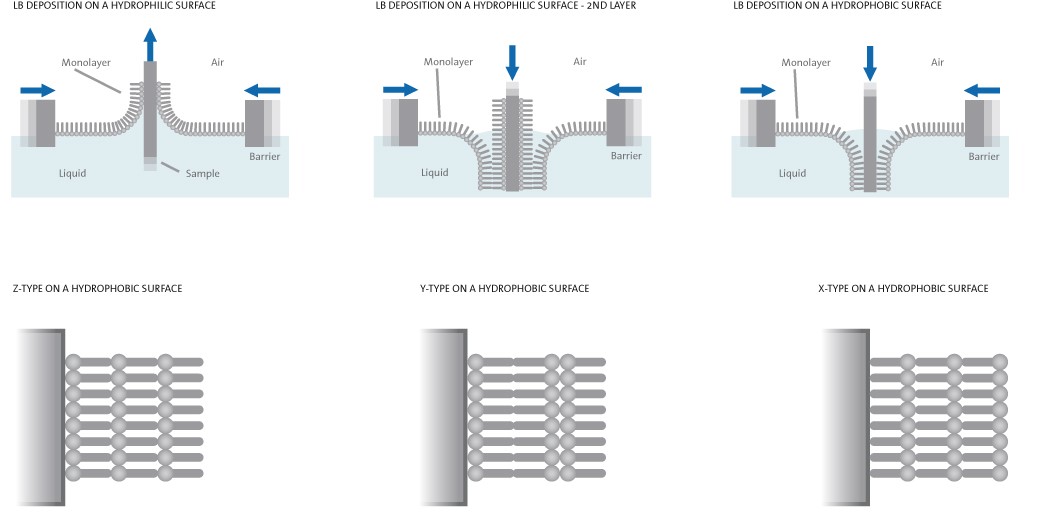 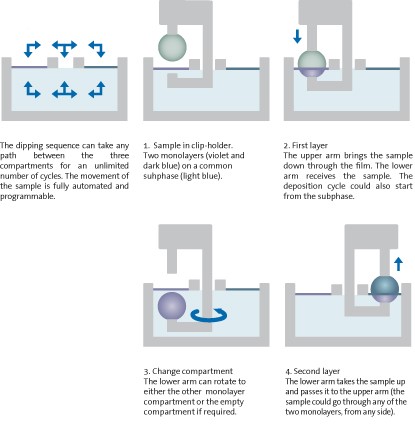 There are several parameters that affect the type of LB film produced. These include the nature of the spread film, the sub-phase composition, and temperature, the surface pressure during the deposition and the deposition speed, the type and nature of the solid substrate, and the time the solid substrate is stored in air or in the sub-phase between the deposition cycles. The quantity and the quality of the deposited monolayer on a solid support are measured by the transfer ratio (t.r.). This is defined as the ratio between the decrease in monolayer area during a deposition stroke, Al, and the area of the substrate, As. An ideal transfer has a t.r. that is equal to 1.

Many properties of LB films depend on the properties of the Langmuir film it was created from. LB films can be characterized for additional information and checked for the quality of the deposition. Commonly used techniques are include: PM-IRRAS (FTIR spectrometry), Surface Plasmon Resonance, Quartz Cristal Microbalance, Ellipsometry, Vibrational spectroscopy, UV-VIS absorbance spectroscopy, X-ray reflectometry etc.

Theory Note 2 — What and Why: Langmuir-Blodgett Films