Surface Roughness
Wettability can be studied by measuring the contact angle of a surface with a given liquid. The Young equation that describes contact angle assumes that the surface is chemically homogenous and topographically smooth. This is however not true in the case of most real surfaces. In order to get the actual contact angle, surface roughness and contact angle are to be measured simultaneously to get the roughness corrected contact angle. This can be done with the Attension Theta Topography.

Both chemical and topographical properties of the surface are important parameters in many different applications and processes, where wetting and adhesion behavior needs to be optimized. Wettability can be studied by measuring the contact angle of the substrate with the given liquid. The well-known Young equation describes the balance at the three-phase contact of solid, liquid and vapor. 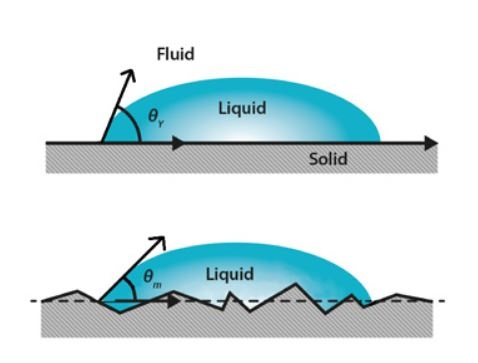 Where θm is the measured contact angle, θY is the Young contact angle and r is the roughness ratio. The roughness ratio is defined as the ratio between the actual and projected solid surface area (r = 1 for a smooth surface and r > 1 for a rough one) and can be calculated from a 3D roughness parameter Sdr as shown already. It is important to notice that the Wenzel equation is based on the assumption that the liquid penetrates into the roughness grooves (as in Figure 1). It has been stated that if the droplet is larger than the roughness scale by two to three orders of magnitude, the Wenzel equation applies4. Wenzel corrected contact angles have been utilized for example to study the wettability of paper sheets5 and cell adhesion to biomaterial surfaces6. Both micro and nanoscale roughness have been shown to have influence on surface wettability.

For additional information on applications, see:

Application Note 17 — Influence of Topography and Wettability on Biocompatibility

In cases where the liquid does not penetrate into the grooves, the Wenzel equation does not apply. In this case the Cassie equation is used instead. The Cassie equation was first developed to describe chemically heterogeneous surfaces, with two different chemistries7.

In the equation above, x is the area fraction characterized by the given chemistry and subscripts 1 and 2 indicate two different surface chemistries (Figure a). If, instead of having different chemistries on the surface, the second area is air like (Figure b), then equation can be written as,

Since contact angle against liquid and air can be considered to be 180° (cos θY2 is -1) and the area fraction x2 = 1 – x1. This equation was developed by Cassie and Baxter7 and is thus often called the Cassie-Baxter equation. It has been found that for the droplet to achieve the real Cassie-Baxter stage (no penetration of the liquid inside the grooves), the geometry of the roughness has to be carefully designed8. 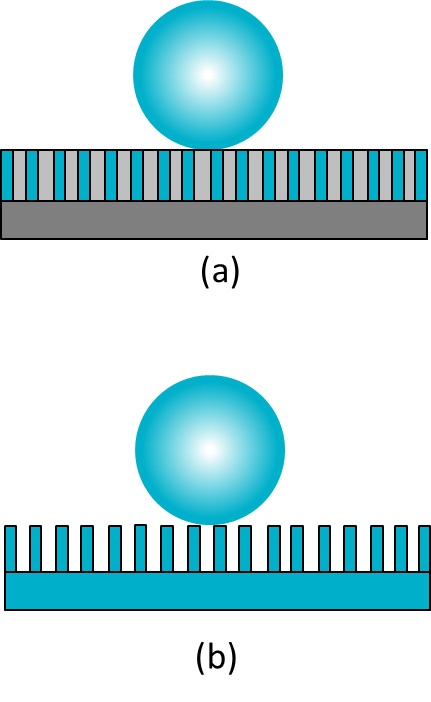 Surface roughness is a measurement of surface texture. It is defined as a vertical deviation of a real surface from its ideally smooth form. Roughness plays an important role in various processes such as friction and adhesion and is widely measured. Surface roughness cannot be accurately characterized by using a single parameter. Instead, a set of surface roughness parameters is defined. Parameters that characterize surface profiles are called 2D parameters and are marked with the letter ‘R’. These parameters are widely utilized in different applica­tions but are not really able to provide the full information on the three-dimensional surfaces. Parameters to characterize surface topography are called 3D parameters and are marked with the letter ‘S’. Some of the 3D parameters have their 2D counterparts; others are specifically developed for 3D surfaces1. A summary of these parameters as stated by the ISO 25178 (and their 2D counterparts) is presented in table below2, ISO 25178. Sa is an arithmetic mean height of the surface. Sq and its 2D counterpart are the most widely used roughness parameters that give the standard deviation of height. Rp and Rv give the maximum height of the summit and maximum depth of the valleys, respectively. Rz gives the peak-to-peak value and R10z is calculated as a mean height value of five local maxima and local minima. Rz is more sensitive to noise than R10z. The ratio between the interfacial and projected area Sdr gives the additional surface area contributed by the texture. This parameter is especially useful in wettability studies since it can be used to calculate the roughness ratio r, according to equation below. 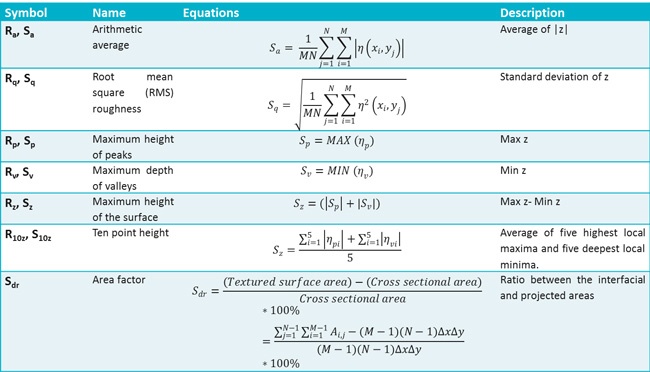 Let's find the best tensiometer for your measurements!

Our tensiometer selector guides you to your optimal instrument.