An emulsion is a mixture of two or more liquids that are normally immiscible with each other. From a thermodynamic point of view, an emulsion is an unstable system, since there is a natural tendency for a liquid-liquid system to separate and reduce its interfacial energy.

Emulsion stability can be defined as the system’s ability to resist changes in its physicochemical properties over time. Emulsion stability is important in manyindustrial applications, including coatings, food products, agriculture formulations, personal care and petroleum. Several mechanisms such as creaming, flocculation and coalescence cause emulsion breakdown.

Although emulsion stability is required in most industrial products and processes, there are also processes where emulsion stability is undesirable. These include oil recovery, for example, where crude oil needs to be separated from water prior to transportation, or waste water treatment where oil-water emulsions are also unwanted.

Interfacial rheology in food and beverage

Proteins can act as surfactants in food products although other stabilizers are also commonly added to improve the stability. Lecithin is one of the few natural surfactants. Natural surfactants are gaining interest as environmental and health issues are of concern.

Polyoxyethylene surfactants are widely utilized in industrial applications, like coatings, food products, agriculture formulations, personal care and petroleum, where emulsion and foam stabilization is important. Alcohol ethoxylates are replacing more toxic alkylphenol ethoxylates that have been traditionally used as emulsifiers in many applications. However, straight-chain alcohol ethoxylates do not demonstrate as good emulsifier properties as alkylphenol ethoxylates, mainly due to the bulky tail of the latter. This is due to differences in the size of the polar head and the hydrocarbon tail that hinder the formation of a closely packed film at the interfaces.

The adsorption and surface rheology properties of two technical-grade non-ionic surfactants based on C10-Guerbet alcohol differing in the numbers of EO groups have been studied. They are denoted as, C10EO6 and C10EO14.

Surface pressure isotherms for both surfactants were fitted to the reorientation model. However, surface rheology data have to be interpreted differently. It will be shown that C10EO6 can be interpreted in the framework of diffusional relaxation process, whereas C10EO14 deviates from a diffusional controlled process. Its surface rheology response is closer to that of non-ionic polymer surfactants. Figure 1 (C10EO6) and Figure 2 (C10EO14) show the storage (E’) and loss (E’’) moduli of both surfactants obtained from the oscillation perturbation at two frequencies (0.02 and 0.5 Hz). The solid and dashed lines are the best fit to experimental data obtained from a diffusional model. It is shown that only the experimental data values of C10EO6 surfactant are in good agreement with the proposed model. 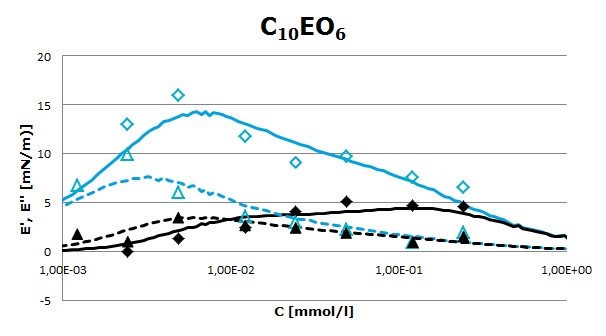 Figure 1. Storage, (E’, open symbols), and loss, (E’’, close symbols), moduli as a function of surfactant bulk concentration at two frequencies (0.02 Hz – triangles) and (0.5 Hz – diamonds) for the C10EO6 surfactant. Solid and dashed lines are the best fit of the experimental data to the diffusional model. 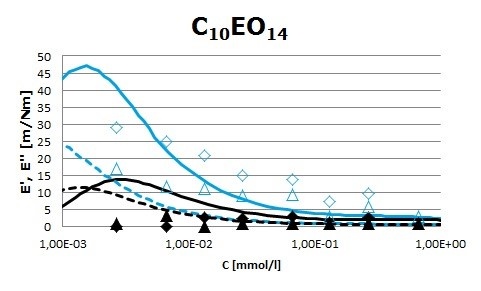 Figure 2. Storage, (E’, open symbols), and loss, (E’’, close symbols), moduli as a function of surfactant bulk concentration at two frequencies (0.02 Hz – triangles) and (0.5 Hz – diamonds) for the C10EO14 surfactant. Solid and dashed lines are the best fit of the experimental data to the diffusional model.

Surface rheology of both surfactants showed that they form a viscoelastic layer at the air/water interface. Nevertheless, the adsorbed films behave differently depending on the number of oxyethylene groups. Thus, for the smaller surfactant, the adsorption and rheological data are well fitted to a diffusional model, whereas the larger C10EO14 surfactant shows a surface behavior closer to that of polymeric surfactants. Moreover, comparison of the dilatational elasticity and viscosity of both surfactants indicates that elasticity is enhanced by increasing the number of EO groups. The elasticity of adsorbed surfactant films is directly related to foam and emulsion stability. Therefore, the C10EO14 surfactant is likely to form more stable layers against coalescence than the shorter C10EO6 surfactant. Nevertheless, foam formation will be enhanced by using C10EO6 than C10EO14, due to the higher diffusivity of the former surfactant. Therefore, these results may find interesting applications in order to rationally develop stable foams and emulsions by using non-ionic surfactants containing oxyethylene groups.

The surface activity of the asphaltenes can be evaluated through simple interfacial tension measurements by using optical tensiometers. By combining a high pressure chamber into the system, the measurements can also be made at high pressures and temperatures.

Another widely utilized approach is to study the interfacial rheology at the oil-water interface. The elasticity at the interface is known to correlate with the stability of the oil-water emulsion. Interfacial rheology of an adsorbed asphaltene layer can be studied using the pulsating drop method. An alternative method which allows interfacial shear rheology (ISR) characterization as a function of asphaltene packing density is based on a floating needle rheometry.