Precise characterization of solid material surfaces plays a vital role in research and product development in many industrial and academic areas. Wettability of the surface is important in processes such as painting and printing, and has been utilized in the study of cell—biomaterial interactions.

Using a series of homologous nonpolar liquids of differing surface tensions a graph of cos θ vs. γ is produced. It will be found that the data form a line which approaches cos θ = 1 at a given value of γ. This value, called the critical surface tension, can be used to characterize your solid surface. It is often presented as the highest value of surface tension of a liquid that will completely wet the solid surface. This approach is most appropriate for low energy surfaces that are being wetted by nonpolar liquids. See references for details on procedure and limitations.

The other ways of characterizing a solid surface is by calculating the free surface energy from theories using slightly different approaches for the calculations. These approaches involve testing the solid against a series of well characterized liquids. The liquids used must be characterized such that the polar and dispersive components of their surface tensions are known. 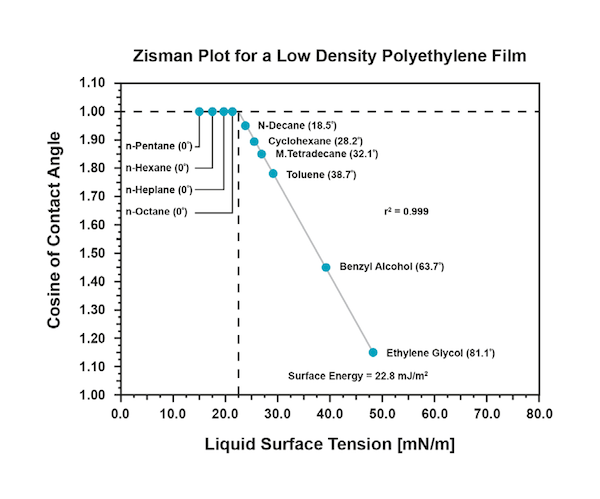 This approach divides the surface energy into two components, dispersive and polar, and uses a geometric mean approach to combine their contributions. The resulting equation when combined with Young’s equation yields:

This equation can be rearranged as by Owens and Wendt to yield:

where θ is the contact angle, γl is liquid surface tension and γs is the solid surface tension, or free energy. The addition of d and p in the superscripts refer to the dispersive and polar components of each. The form of the equation is of the type y = mx + b. You can graph (γlp)½ / (γld)½ vs. γl (1 + cos θ) / (1 + γld)½. The slope will be (γsp)½ and the y-intercept will be (γsd)½. The total free surface energy is merely the sum of its two component forces.

This method utilizes a similar approach but uses a harmonic mean equation to sum the dispersive and polar contributions. Contact angles against two liquids with known values of γd and γp are measured. The values for each experiment are put into the following equation:

where γ refers to surface tension (surface free energy), the subscripts l and s refer to liquid and solid, and the superscripts d and p refer to dispersive and polar components. You then have two equations with two unknowns and can solve for γsd and γsp.

Contact angles against at least three liquids with known values of γd, γ+ and γ– are measured. The values for each experiment are put into the following equation:

where γ refers to surface tension (surface free energy), the subscripts l and s refer to liquid and solid, and the superscripts d, + and – refer to dispersive, acid and base components. You then have three equations with three unknowns and can solve for γsd, γs+ and γs–. The total surface free energy of the solid is then given by:

Let's find the best tensiometer for your measurements!

Our tensiometer selector guides you to your optimal instrument.