As medical research has moved forward, replacing missing biological structures or supporting them with medical implants has become a routine.

The surfaces of the biomaterials are often designed and tailored to modulate the physical and chemical properties to improve the functionality of the biomaterial in each application, and can be manufactured from variety of different materials, including titanium, different plastics, silicone or apatite depending on the desired end-use and function.

Common to all the materials is that they must be biocompatible, which is often achieved with different surface treatments or the addition of coatings. We offer several instruments to help you design, fabricate, characterize and evaluate the surface properties and performance of biomaterials.

Design and fabrication of biocompatible coatings

Historically, medical devices were commonly made from various metals that were placed directly in the body. More recently, to improve the biocompatibility of the medical devices, different coatings have often been applied. In addition to the essential biocompatibility, other desirable properties, such as responsiveness to various stimuli, drug delivery capabilities and antibacterial qualities, can also be tuned in these biomaterial coatings.

Polymers is a category of materials which is of great interest for surface coatings for biomedical and biological applications. Not only do polymers demonstrate good biocompatibility, they also enable drug delivery, they can be readily surface-modified and they can dissolve over time when they are no longer needed. Polyelectrolyte multilayers are used in many biomaterial applications due to the range of available polymers, which provide many unique possibilities to create surface coatings with the desirable properties. The layers can also be modified to release drugs or active peptides. Polymer brushes, which respond to changes in temperature, pH and ionic strength, are also popular.

Polyelectrolyte multilayers are created by layer-by-layer deposition of polycations and polyanions. The layer-by-layer technique using dip coaters is not only proven as an excellent method for deposition of polyelectrolytes, but you can also deposit inorganic particles or active biomolecules on the biomaterial surface, which offers the advantage of coating complex surfaces.

The QCM-D technology is commonly used to both monitor and characterize build-up and response of polymer brushes as well as polyelectrolyte multilayers. The layer-by-layer build-up of polyelectrolyte multilayer films can be characterized in real-time in terms of adsorption rate, film thickness and rigidity, and subsequent interactions on the film, including crosslinking, swelling, calcification, drug delivery and cell attachment, can also be characterized.

Characterization and evaluation of biocompatibility

The biocompatibility of biomaterials can be studied through contact angle measurements to characterize cell adhesion onto the biomaterial. Small water contact angles and high surface free energies indicate good adhesion properties for the material. Surface roughness also plays a role in biomaterial-cell interactions.

Biocompatibility and wettability also play a role in contact lens development where good wetting properties are required for comfortable lenses.

The Q-Sense® QCM-D enables the evaluation of biocompatibility in terms of characterization of interactions between a surface and its physiological environment, answering questions about how much protein is adsorbed, to what extent cells attach to different materials, the extent of surface induced immune responses and how the surface of a material can be modified to optimize its function. It is thus an efficient tool for exploring, characterizing and optimizing the biomaterial properties.

The wettability of a contact lens is a measure of the ability of the lens to support a continuous and rupture-resistant tear film on its surface. A lens with a limited wettability is uncomfortable and has reduced visual performance. Different types of coatings are utilized to improve the quality of the lens.

The wetting properties of a contact lens are evaluated by both static  and dynamic contact angle measurements. Captive bubble measurements are commonly used as it is possible to maintain fully hydrated conditions on the lens surface, mimicking the condition on the eye. Receding contact angle mimics the situation when the eyelid is opened and the tear film begins rupturing on the lens. Advancing the contact angle on the other hand resembles the conditions when the eyelid closes and the tear film on the lens begins to recover. 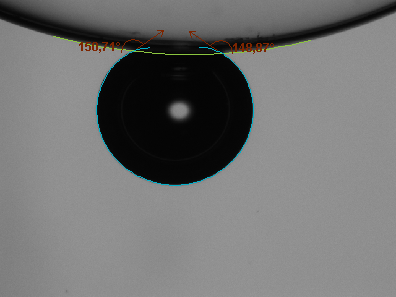 When a biomaterial or medical device is placed in the body, proteins almost immediately begin to adsorb to the surface. In some cases, such as with orthopedic implants, this is beneficial because the proteins can facilitate the attachment of cells that will lead to proper integration of the device. In other cases, such as with stents, protein adsorption is generally unfavorable because the adsorption of certain proteins, specifically fibrinogen, may induce platelet binding and subsequent thrombosis or immune responses. The conformation of a protein may also dictate how active a surface may be with subsequent biological responses. Surface modifications to the material can be used to promote the desired pathway depending on the specific application.

The QCM-D technology enables the real-time analysis of protein adsorption onto a variety of surfaces. Specifically, the amount of protein bound as well as the rate of adsorption can be analyzed. Conformational information can also be inferred from the dissipation response, especially when the protein has an elongated shape. This facilitates the screening of new medical device materials and surface modifications and helps in the understanding of protein adsorption mechanisms.

Characterization of cell adhesion and spreading in real time

Adhesion of cells to the surface of a biomaterial can be a major factor mediating its biocompatibility and integration. For example, the adhesion of osteoblasts and fibroblasts can encourage tissue repair and wound healing. Cell adhesion is dependent on surface properties such as surface energy, roughness and proteins adsorbed to the surface.

The QCM-D technology provides a unique way to monitor cells, both during initial cell adhesion as well as during cell spreading and morphology in real time. The QSense window module enables simultaneous QCM-D and light microscopy studies that can correlate morphological changes and viscoelastic properties of the cell.

Osteointegration or fixation of biomaterials within the bone structure is a key step towards a successful implant. One of the major causes of implant failures is poor or weak fixation of the biomaterial to the bone. To enhance implant fixation, bioceramic coatings of calcium phosphate (CaP) are used as a bioactive interface between the bulk implant and the surrounding tissue. These coatings can be made on polyelectrolyte multilayers that have been modified to induce crystal nucleation and controlled growth of CaP. The method has the advantage that it can be applied to complex shapes and porous materials. 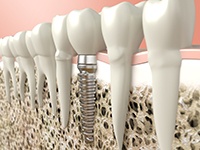 In this webinar you will learn how to measure the effects of surface roughness on biomaterial performance.