Are you working with surfactant characterization?

Being one of the key components in cleaning products, surfactants are in the limelight when it comes to enhancing the performance of a cleaning formulation. Contributing with key properties such as foaming, wetting of the surface to be cleaned, emulsifying the soils and keeping the dirt dispersed in solution to prevent re-deposition on surface, there are several performance aspects to characterize, evaluate and enhance for the end formulation to be at its best. The dynamics of the surface-active agents at the interface play a major role and are essential to characterize and evaluate. When designing, tailoring and optimizing performance with respect to the desired properties and certain conditions, it is thus important to fully understand how the single surfactant, the surfactant package or the more complex detergent formulations function in real-time and on the nanoscale. Both the interaction between the surfactant and the specific soil and the removal efficiency as a function of key parameters such as concentration, water quality and temperature, are relevant to characterize to improve the activity, efficiency and cost effectiveness of the product.

Evaluating the efficiency of surfactants by wettability

After spreading the detergent solution, emulsification of the soil must occur. Surfactants play a major role in the process. Surfactants also help to disperse the collected dirt in solution, preventing the re-deposition on the surface.

Optimizing the amount of surfactants in detergent solution

It is important to optimize the amount of surfactants used in cleaning solutions as using excess amounts has both economic and environmental effects. One important parameter often used in surfactant concentration optimization is critical micelle concentration (CMC). As detergency is affected by monomeric surfactants and is practically unaffected by the presence of micelles, the CMC point can be used as an indicator for the amount of surfactants needed. It is possible to make fully automated CMC measurements with Sigma 700/701 combined with automated dispensers. This reduces the required labour time as measurements are run automatically without human interaction. 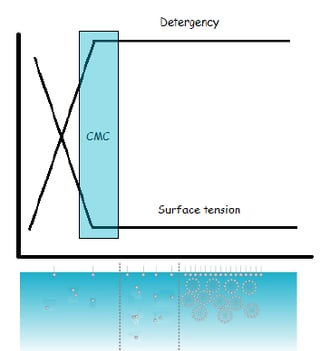 With QSense® QCM-D technology, there are several approaches to explore, characterize and optimize the surfactant behavior and performance, depending on the need. Both single surfactants, surfactant packages or full formulation can be characterized. In addition to the cleaning profile, which is a fingerprint of how a specific surfactant, multi-surfactant solution or full formulation interacts with a certain material or soil, and which can be used to rank the removal efficiency, it is also possible to explore surface and soil interaction kinetics with high precision, as a function of key parameters such as temperature and surfactant concentration. It is also possible to monitor and characterize surfactant/surface interface dynamics and behavior in general, and to extract for example, adsorption kinetics and morphological changes to the adsorbed surfactant layer.