With FIFA World Cup just around the corner, the world’s attention turns to the football. The official World Cup football this year is called Telstar 18, inspired by the original Telstar that was made for 1970 games. The name Telstar comes from “star of television” as it was the first black and white ball made to look sharp on television at the time when color TV was not so common.

The football used at 2018 World Cup resembles the one used back in 1970 by the appearance but that's where the similarities end. Have you ever thought how much science is put behind to develop the perfect football?

From leather to polymers

The very first footballs were inflated pig bladders wrapped in leather. Leather was also the material of the original Telstar. However, leather absorbs water which makes the ball heavier if played in wet conditions. For 1986 Mexico World Cup, the first polyurethane coated ball was introduced. As the coating of the football has been further developed, the water absorbance has reduced significantly.

Making the football round is not as easy as it might seem. The original Telstar was composed of 32 panels with 20 hexagons and 12 pentagons. This smart design allows a rather spherical structure of the football. The same type of structure is found in nature, in the form of fullerenes i.e. one of the many shapes of carbon molecules. 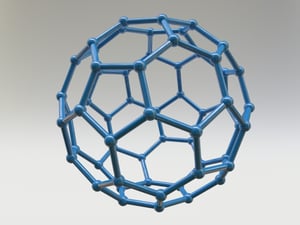 This is still the most widely used football in professional matches.

The Teamgeist, the 2006 World Cup ball, was the first World Cup football to not have the traditional 32 panels. Instead, it was made up of 14 panels and the panel shape changed drastically. Since then the number of panels has gone down. The new, Telstar 18 has only 6 panels which makes it even closer to perfect sphere with fewer seams. There are several studies where different panel formats have been evaluated and compared in terms of the aerodynamics of the football. Brazuca, the official football at the Brazilian World Cup 2014, was also made of 6 panels but with very different panel shape compared to Telstar 18. The seam length in this years’ version is almost 1 meter longer than in Brazuca, which makes Telstar 18 to soar 8 to 9 % less distance than Brazuca. You can read the full study here.

From stitching to thermally bonded

So next time you sit in front of the TV to cheer for your favorite, take a moment to appreciate all the efforts taken to make the perfect football.

A set of technologies to use in a biointerfaces lab

The range of technologies that could be used in a biointerfaces lab is vast. We talked to Dr. Jenny Malmstrom, University of Auckland to learn more.

Light interaction with matter is an important part of our everyday lives. We talked to Prof. Magnus Jonsson at Linköping University, to learn more.

This is what we learned about the fascinating area of nanomedicines when we talked to Dr. Gustav Emilsson, who is working with nanomedicine development