The traditional way of testing etching and corrosion is to repeat a number of wash cycles and thereafter visually inspect the object for etching effects. Sometimes, as many as 70 wash cycles may be required to detect and evaluate the etching. This is both costly and time-consuming but there are faster ways. Here we present a method that will help you assess the etching effects in one single wash cycle and in less than an hour.

The experimental setup for a 1h assessment of etching effects

QSense® technology is a method that can monitor surface etching with high resolution in a time-resolved manner. Thanks to the nanoscale sensitivity of this technology, removal of surface material can be detected and quantified in a single wash cycle.

Comparison of the etching properties of two commercial detergents on glass

As an example, let us look at an assessment of the etching of two commercial detergents. Using a fully automated QSense instrument, the etching properties of detergent A and detergent B on soda lime were evaluated. Two different temperatures, 25 and 40°C, were tested and Swedish tap was used as a control. The 50-minute long wash program, used in the test, consisted of a 30-minute wash step and a 20-minute rinse step where Swedish tap water was used.

After the test, the etch rate during the detergent exposure was extracted, and the average surface removal was calculated as thickness removed per hour measured in nanometers.

Detergent A showed higher etching than detergent B 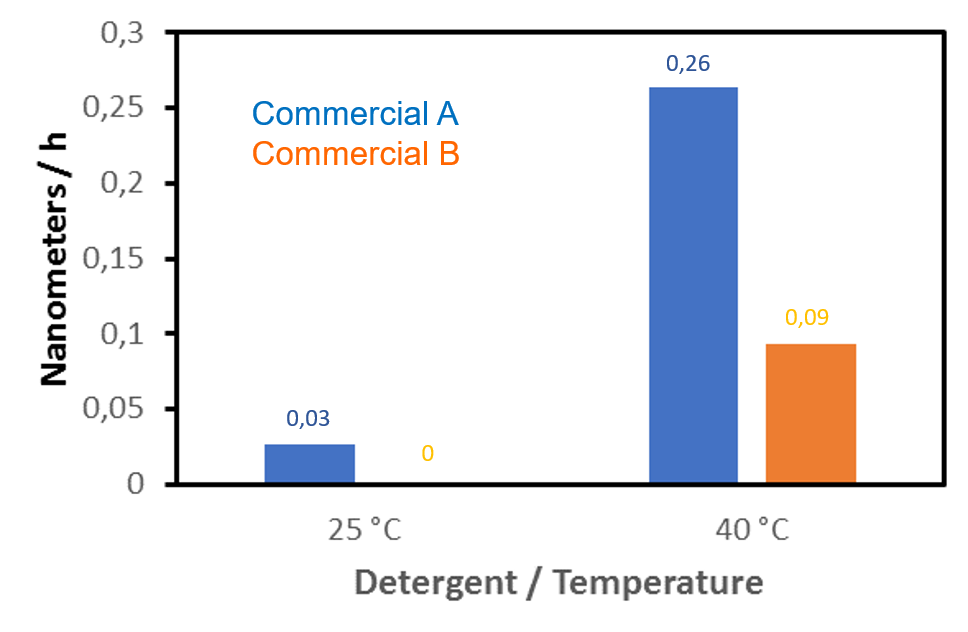 Etching assessments can be very time-consuming, and they often involve an element of subjective nature, for example, grading by visual inspection. QSense technology offers both fast and objective quantification of etching effects. The method enables single point etching data, for a given surface and temperature, to be collected within one hour.

Download the guide to learn more about the procedure for evaluation of detergent etching properties using QSense technology.

Soil removal efficiency of a formulation is typically assessed by running a cleaning test followed by an analysis of the result. Here we show how these two steps can be run simultaneously.

How Nouryon ranks detergent performance when the traditional tools fail

When, Nouryon (former AkzoNobel speciality chemicals), launched a new surfactant with a good dermatological profile, they wanted to prove superior performance vs competitive benchmarks. As the current test methods were not sensitive enough, they turned to an analysis using QSense cleaning profile.

What is the optimal surfactant concentration to use in a cleaning formulation? Here we show how the cleaning efficiency as a function of detergent concentration can be assessed within an hour.

How to rank detergent performance in less than an hour

Throughout the cleaning product life cycle, ranking of performance is an important type of assessment. It can be quite time-consuming, but with the right approach, it is possible to evaluate and rank the product performance in less than one hour. Here we tell you how.

Eva Ekerot is the Senior Commercial Portfolio Manager for QSense. She has a background managing numerous product portfolios within the medical technology and analytical instrument industries. She is devoted to user driven development of high tech products. More user friendly technology is accessible to more people!