In this Surface Science educational series, you will be introduced to how it all began through key events and important aspects in the evolution from the early days to the mature area.

The series will cover topics such as the bridging of surface physics and surface chemistry, the paradigm shift from the study of static surface systems to the exploration of dynamic ones, as well as the importance of the advances in theory without which the evolution of the field could not have happened. It will also guide you through the different analytical methods that are used in the surface science and dig deeper into some of the areas that have emerged, such as biomaterials and nanotechnology.

The Evolution of Surface Science, part 1

Surface physics one of the branches of surface science

In surface science, various phenomena at the intersection of different phases are explored. The phases could be any of vacuum, gas, liquid and solid, and it is at the interface between two such phases where the focus of interest lies. Covering phenomena of both physical and chemical character, the surface science field includes the subareas surface physics and surface chemistry.

At the time of my , I worked with what could be called “the mother of pure surface physics”, namely single crystal surfaces in an ultra-high vacuum. This subarea of surface science deals with questions like

The ideal situation in early surface physics was a solid surface created by cleaving a solid body into two halves, thereby exposing two surfaces, without any interference from surrounding gas or liquid. In other words, the cleavage had to occur in a perfect, ultra-high vacuum. A more common way, in practice, to create the clean surface was to mount a single crystal, cut and polished to expose a low index crystal plane, in a vacuum chamber, pumping down to an ultra-high vacuum, and then removing any surface dirt, like oxides or contamination, by a combination of repeated ion sputtering and annealing until a well-ordered single crystal surface was exposed.

At the dawn of this era, simple metals and semiconductors, single element surfaces were in focus. Successively, over several decades, more complex surfaces were addressed such as alloys, oxides, carbides polymers. Also, similarly successively, interactions with gases and liquids were approached, and similar questions were asked for these ad-atoms and ad-molecules as for the clean surface.

A boost from advances in semiconductor technology and microelectronics

Pure surface physics got a boost in the late 1950s and through the 60s from developments in semiconductor technology and microelectronics. The Nobel Prize in Physics has been awarded in both areas. In 1956, the Nobel Prize went to Bardeen, Brattain Shockley at Bell Telephone Labs for the transistor, and in 2000 the shared Nobel Prize was awarded to Kilby for the integrated circuit (IC).

Integrated circuits and their active elements, including transistors and diodes, were strongly dependent on the understanding and processing of clean surfaces, particularly silicon and silicon oxides, but the technology also requires conductor materials prepared in the form of thin films and the controlled growth of insulating oxide layers, especially silicon dioxide, for most IC processing steps and in e.g. MOSFETs. These needs resulted in the rapid development of ultra-high vacuum (UHV) technology, to be able to prepare and study clean surfaces, and of many new analytical methods to study surfaces. LEED was one of the new methods. The basic principle of LEED is electron diffraction, in which the Nobel Prize in Physics was awarded as early as 1937. Other methods were XPS (ESCA), for which Siegbahn received the Nobel Prize in Physics in 1981, AES, SIMS and later STM, in which Binnig and Rohrer, IBM Research Labs, in Switzerland, and AFM were awarded a shared Nobel Prize in Physics in 1986.

There was an increasing need to produce thin films with desired properties for ICs but also in materials science, e.g. for cutting (hard metal) tools, tribology, corrosion resistance and optical devices. The nucleation and growth of thin films on surfaces by evaporation and sputtering and other deposition methods were intensely studied and developed, including instrumentation development. Not surprisingly, the Bell Telephone and IBM research laboratories were leading research labs in surface science at that time and in subsequent decades.

The early situation in pure surface physics contrasted with that early surface chemistry, the other branch of surface science. In surface chemistry, the presence of molecules, in either the gas or liquid phase, which could interact with the surface was a central and inherent ingredient from the beginning. A famous and early example is heterogeneous catalysis, an active field already at the beginning of the 20th century, both practically and scientifically. Prominent names are Sabatier, who received the shared Nobel Prize in Chemistry in 1912 for hydrogenation reactions, Haber, who received the Nobel Prize in Chemistry in 1918 for his work on ammonia synthesis and Langmuir, who was awarded the Nobel Prize in Chemistry in 1932, for general contributions to surface science. In modern times the Nobel Prize to G Ertl in 2007 for his major and broad contributions to surface science should also be mentioned. Many important industrial processes were drivers of this over a development, such as ammonia synthesis, e.g. for fertilizers, and petrochemical processes related to oil refinement and fuel production. Other important surface chemistry branches were colloid science, which is strongly governed by interface forces; surfactants, monolayer films on liquids and self-organizing monolayers like thiols on gold. 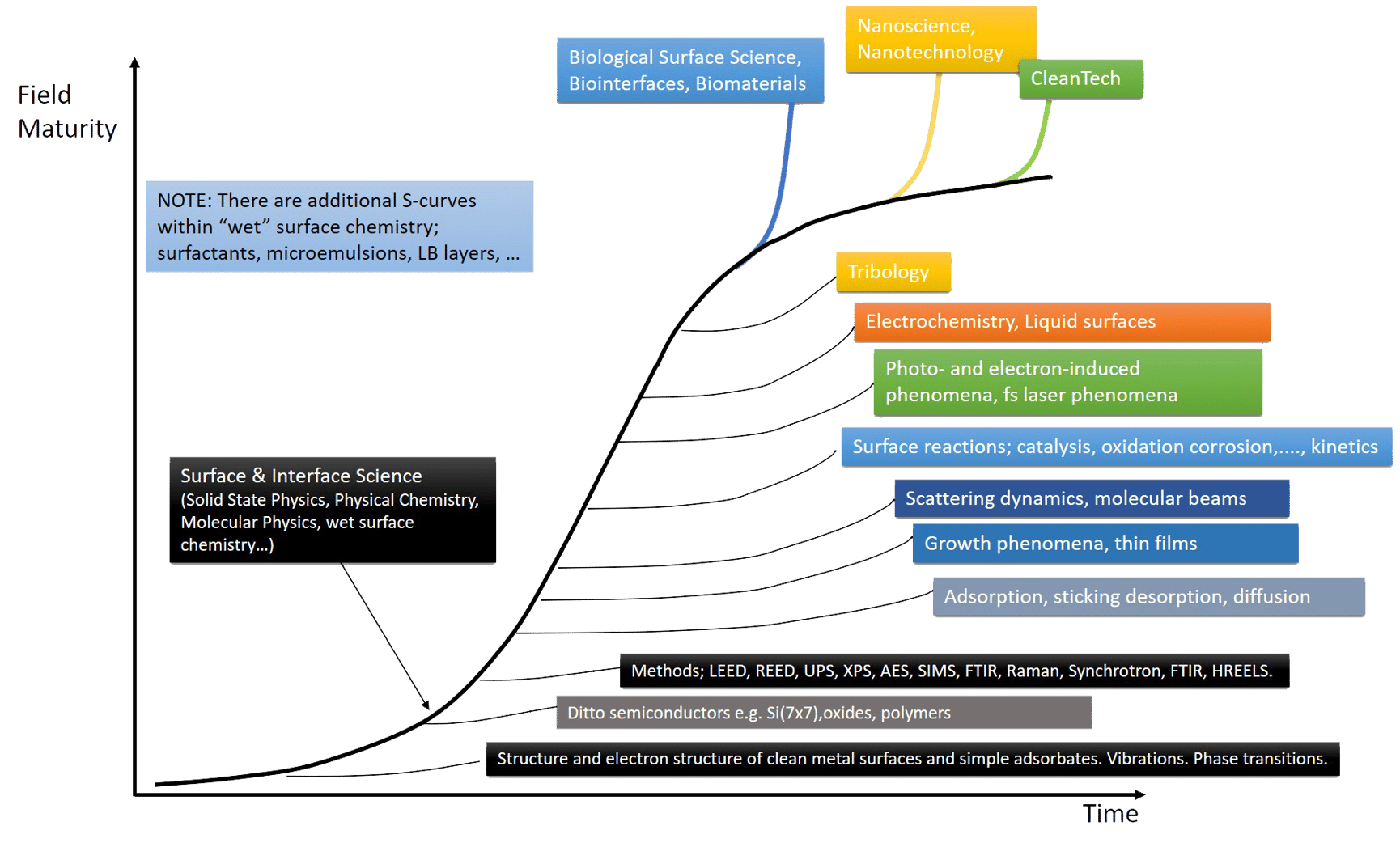 Figure 1. The S-curve evolution of surface science, from early days to a mature area, and scientific fields that have emerged along the way.

This mutual interaction between the surface physics and surface chemistry paths caused an acceleration in the area of surface science as a whole, which eventually impacted other fields of science and technology. As mentioned above, one of the best examples is heterogeneous catalysis, where two concepts called the pressure gap and the materials gap, sometimes also called the structure gap, long plagued and challenged the R&D community, and created both about their mutual value for each other, and a hunt for bridges between them. The gaps were described as the contrast between (i) UHV pressure studies of heterogeneous catalysis in surface physics (at, say, 10-6 to 10-9 torr) and the practical, industrial systems at 1-100ds of atmospheres, and (ii) between ideal single crystal catalyst surfaces as model systems and the practical catalytic systems consisting of nm sized particles exposing different facets or being non-crystalline. Could UHV studies at 10-6 torr on single crystals really tell us anything about the situation on nanoparticles on oxide supports at six to nine orders of magnitude higher pressures? Today these gaps are successively closing due to studies on bridging pressures and the controlled preparation of catalyst nanoparticles, employing modern nanotechnology methods, and studies of catalytic processes even on single nanoparticles.

Other “gaps” that were first identified as gaps and then bridged in similar ways existed in, for example, electrochemistry, corrosion science and tribology. This manifold of surface science evolution paths and new applications can be described as many S-curves, just like the historical development in any important area of science (Fig 1). The S-curve describes an initially slow development characterized by the formulation of the scientific problems, the development of preparative and analytical methods, including theories, to make more and more detailed studies possible, followed by a successive acceleration when the methods and problem formulation are in place and then a maturation of the field with deeper and deeper understanding.

As the basic surface science S-curve developed and matured into what could be called a platform science, new areas such as biological surface science and nanoscience, Fig. 1, took off and utilized the surface understanding and methodology. Simultaneously, more and more difficult and complex surface systems have been addressed, like composite surfaces, alloys, oxides, polymers, and complex molecules, hydrocarbons and other organic molecules, and even biomolecules and liquid surfaces.

The evolution of knowledge described above could not have happened without equally important advances in theory, as in the experimental arena. In the above brief review, I have also deliberately avoided dealing with the kinetics and dynamics of surface processes, like reaction kinetics of catalytic reactions and the detailed dynamics of e.g. molecular scattering against a surface. One could say that I have restricted the descriptions to “static surface systems”, which do not evolve over time. Dynamics and kinetics, which involve the temporal evolution of surface systems, is covered in this post.

What is Tissue Engineering?

Learn more about what tissue engineering is and how it is used.

CCS, BECCS and DAC - What is the difference?

Learn more about what is the difference between the three carbon-capturing methods CCS, BECCS, and DAC.

Surface Science - can it facilitate a more sustainable energy system?