Throughout drug manufacturing, storage and administration stages, protein drugs may interact with many different types of surfaces such as glass, oils, plastic polymers, and metals in concentrators, tubings, containers or bags.

Studying protein interaction with the different surface materials and at different solution conditions, the material compatibility can be eval­uated and conditions that minimize for example adsorption can be identified. It also enables tailoring of formulation additives, such as stabilizers and surfactants, as well as of the packaging used in the development and manufacturing of new protein therapeu­tics. Here we show examples where QSense® QCM-D analysis was used to do such assessments.

Characterization of protein adsorption to surfaces

Quartz Crystal Microbalance with Dissipation monitoring, QCM-D, is a well-established surface sensitive technol­ogy which has been used for analysis of molecular interactions at surfaces and interfaces for more than two decades. The time resolved information on mass, thickness and viscoelastic properties can for example be used to analyze molecular adsorption and desorption, layer build-up, and to characterize layer properties.

Below we briefly present four studies where QSense technology was used to analyze and quan­tify the adsorption of therapeutic mono­clonal antibodies and proteins to different materials and interfaces. In addition to the impact of the material, the effect of sample concentration and presence of surfactants on the surface uptake was also character­ized and quantified.

The questions asked in the four studies

Study 1. Which conditions will minimize the adsorption?

Analysis of antibody adsorption to different surfaces and at different conditions

In this study,1 the adsorption behavior of two monoclonal antibodies, mAb1 and mAb2, with significant differences in hydrophobicity and self-oligomerization behavior were evaluated. The surface uptake of the two molecules was charac­terized as a function of surface material, presence/absence of surfactant, concen­tration and pH.

Influence of molecule: In the antibody study,1 it was concluded that the amount adsorbed varied with the antibody used. On all of the four surfaces analyzed, mAb2 showed a higher adsorption than mAb1 (Fig. 1A). 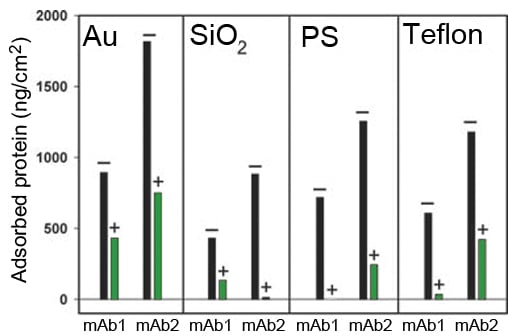 Figure 1A. Mass of irreversibly bound mAb1 and mAb2 (1 mg/ml). + and – represent the presence or absence of the surfactant PS-80. 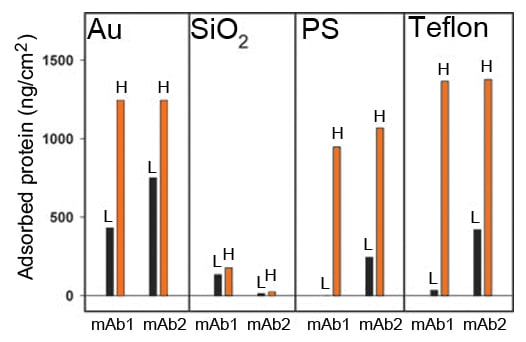 Figure 1B. Mass of irreversibly bound mAb1 and mAb2 as a function of concentration. L refers to 1 mg/ml and H refers to 50 mg/ml. All data was generated in the presence of PS-80. Control measurements provided an average value for adsorbed surfactant and protein mass has been adjusted accordingly.

Key observations: Combinations of antibody, surface material and excipient that essentially prevents adsorption were identified. The effect was most pronounced for mAb1 on PS.

Study 2: Which surfactant will minimize the adsorption?

In the second study,2 the interaction of a protein drug with a silicone oil/water interface was analyzed. A common way to store and administer therapeutic protein to patients is via prefilled glass-syringes. As sili­cone oil, which is used as a syringe lubricant, could induce protein loss, the protein-silicone oil interaction is relevant to evaluate. The adsorption of the protein to a silicone oil/water interface was char­acterized in the presence and absence of two surfactants.

Influence of surfactant: In the Abatacept study,2 it was concluded that the surfactant PS-80 reduced the amount of adsorption to the silicone oil/water interface whereas Poloxamer 188 did not alter the binding significantly (Fig. 2).

Figure 2. Changes in estimated mass adsorbed at the oil/water interface as a function of time upon injection of 10 mg/ml Abatacept without PS-80, with PS-80 and Poloxamer 188. This data was analyzed with permission from the authors.2

Study 3: Which material will adsorb the most protein?

In the third study,3 protein adsorption to borosilicate and PVDF at low and high concentration was evaluated. The surface material and concentrations used are relevant to study in the context of protein production.

Influence of surface material: In the lyzosyme study,3 it was concluded that the surface uptake is higher on glass than on plastic for both concentrations, Fig 3.

Influence of protein concentration: The surface uptake was higher on both surfaces at the high concentration, Fig 3.

Study 4: Is the mAb behavior at the oil-water inter­face linked to an aggregation propensity?

In the fourth study,4 the overall ambition was to develop a funda­mental understanding of the aggregation propensities of mAb formulations, and to assess if surfactants of different type and concentration would impact the mAb adsorption and aggregation. The adsorption of two different monoclonal antibodies, mAb1 and mAb2, with different aggregation propensities, two pharma­ceutically relevant surfactants, and a set of antibody-surfactant mixtures, was analyzed. The surface material, PDMS, served as a mimic of the silicone-oil coated surfaces encountered in pre-filled syringes. The surface mass uptake of the different samples was compared, and correlated, with additional and comple­mentary analysis of the mAb surface activity and aggregation.

Results 4: The mAb behavior at the oil-water interface is linked to aggregation propensity

Surfactants: In the study, it was concluded that he mass uptake of the surfactants was lower than that of the mAbs. The surfactant adsorption was partially reversible, Fig 4B.

Antibody + surfactant mixtures: It was observed that the anti­body and surfactants will co-adsorb, Figs 4B-C.

Key conclusions: In this work, the authors conclude that there is a direct correspondence between the adsorption of mAbs at oil-wa­ter interfaces and aggregation. They also concluded that added surfactants will competitively adsorb to the oil-water interface, and thereby lower the mAb aggregation, Fig 4.

QSense QCM-D technology has a long track record in analysis of molecular interactions at surfaces and interfaces. Here we have presented four very brief examples of what questions QCM-D analysis can help answer in the context of container and closure interactions. 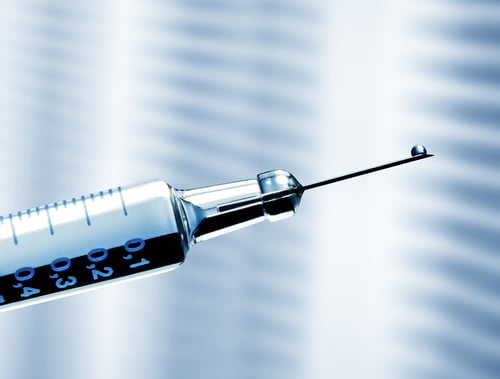