The QCM surface is oscillating back and forth and it is the coupling of mass to this oscillation that is the basic sensing principle. However, the amplitude of oscillation is not constant across the crystal surface. How it varies depends on the geometry of the sensor and its electrodes. Standard, disk-like sensors have, to a good approximation, a radial dependence, A(r), according to Eq. 1.

The maximum oscillation amplitude, A0, is reached in the middle of the crystal at r=0, and then the amplitude decreases towards the edge, to reach close to zero displacement at the edge, or even before the edge. The width of the gaussian, c, is different for different harmonics. The higher the overtone, the sharper the gaussian, see Fig 1.

Figure 1. Normalized distribution of the crystal oscillation amplitude at n = 1, 3, 5 and 7 for a 5 MHz crystal, measured at Biolin Scientific. The width of the gaussian depends on the overtone number, the higher the harmonic the sharper the Gaussian. The dashed lines indicate the top (large dashed circle) and bottom electrodes (small dashed circle). The brown ellipses represent cross-sections of the top O-ring.

The force exerted on a particle that is fixed on the sensor surface is directly proportional to the amplitude of oscillation at the fixing point times the mass of the particle. And Newton taught us that the force on the sensor is equal in size to that of the force on the particle. It is then easy to understand that a particle placed at the crystal center will cause a larger force, and hence frequency shift, than if it was placed at the crystal edge, Fig. 2.

Figure 2. Illustration of how the frequency shift caused by a localized mass deposited at the sensor surface depends on where the mass is placed. The mass sensitivity varies with the sensor radius according to a Gaussian function (Fig. 1). Therefore, a mass deposited at the rim (A) will generate a smaller frequency shift than if the mass is deposited closer to the middle (B). Mass deposition at the middle (C) will generate the largest response.

Consequences of uneven mass distribution in a measurement situation

Relative changes may be absolutely right

Is all then lost if you have uneven and unknown mass distribution? Not quite: If all particles change their mass by X%, then the sum of forces (and the measured frequency shift) will also change by X% regardless of how the particles are distributed. This means that you can still compare the relative change in one mass distribution with another.

Get the text as pdf 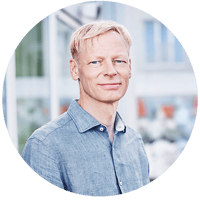 Dr. Michael Rodal is a former employee at Biolin Scientific and a guest writer on the blog. Michael did his Ph.D. in engineering physics and is one of the inventors of the QCM-D technology as well as co-founder of Q-Sense AB. Having developed, and worked with, the technology since the ’90s, Michael is one of the world's leading QCM-D experts.