A common way to store and administer therapeutic protein to patients is via prefilled glass-syringes.  Silicone oil, which is used as a syringe lubricant, could induce protein loss, but the addition of surfactant has been shown to reduce such loss. A study has been made to get a deeper understanding of why this is the case [1]. Here we present a summary of how the protein-silicone oil interaction was analyzed in the presence and absence of surfactant.

The protein-silicone oil surface interaction was analyzed with QSense® QCM-D, a surface-sensitive technology that monitors mass uptake at the surface in real-time. In addition to the mass, QCM-D also senses the structure of the layer adsorbed (or bound) at the surface. The adsorption behavior of the model protein, both in the absence and presence of two different surfactants, PS-80 and Poloxamer, were measured and compared.

One of the surfactants reduces the amount adsorbed

The time-resolved mass changes, Fig. 1, showed that the total amount adsorbed is smaller when PS-80 is added to the protein solution, compared to when there is no surfactant present. The addition of Poloxamer 188, however, did not alter the amount adsorbed significantly. A possible explanation for this observation, presented by the authors [1], could be that PS-80 shows faster adsorption kinetics onto the oil-water interface than the model protein on its own (data not shown). This would allow PS-80 to form a protective layer at the surface, and thereby be more effective in preventing the protein adsorption, compared to Poloxamer 188, which binds more slowly to the interface.

Download the case study to read more about protein interaction with surfaces with and without the presence of excipient. 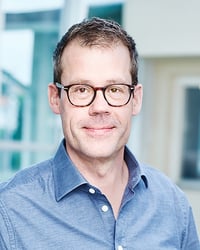