Anybody who has ever measured a contact angle has heard about the Young equation. But have you ever thought about who is the man behind it? Did you know that Thomas Young was a physician by profession and that his most remarkable discoveries are related to vision and light rather than the behavior of liquids on surfaces? Also, he was a man fascinated with languages, especially those in ancient Egypt, and began to decipher the Rosetta Stone. The mere range of Thomas Young knowledge is easy to see when looking at the Encyclopaedia Britannica written between 1816 to 1825 where Young wrote 63 articles ranging from biographies to articles including titles “Bridges”, “Egypt”, “Cohesion” and Tides”. It's no wonder that Thomas Young has been called “the last man who knew everything” [1].

Who was Thomas Young?

Thomas Young was born in Milverton, England, on the 13th of June 1773. He was a child prodigy. By the age of 2 he was reading fluently in English, and by the age of 14 was fluent in Latin and Greek. He also gains knowledge of French and Italian and could read Hebrew among several other languages. Young kept note of books he read each year, and in the year 1790, those include Newton’s Principia and Opticks. Later, in his autobiographical sketch, he describes himself as a slow reader estimating to have read only a thousand volumes in 50 years. 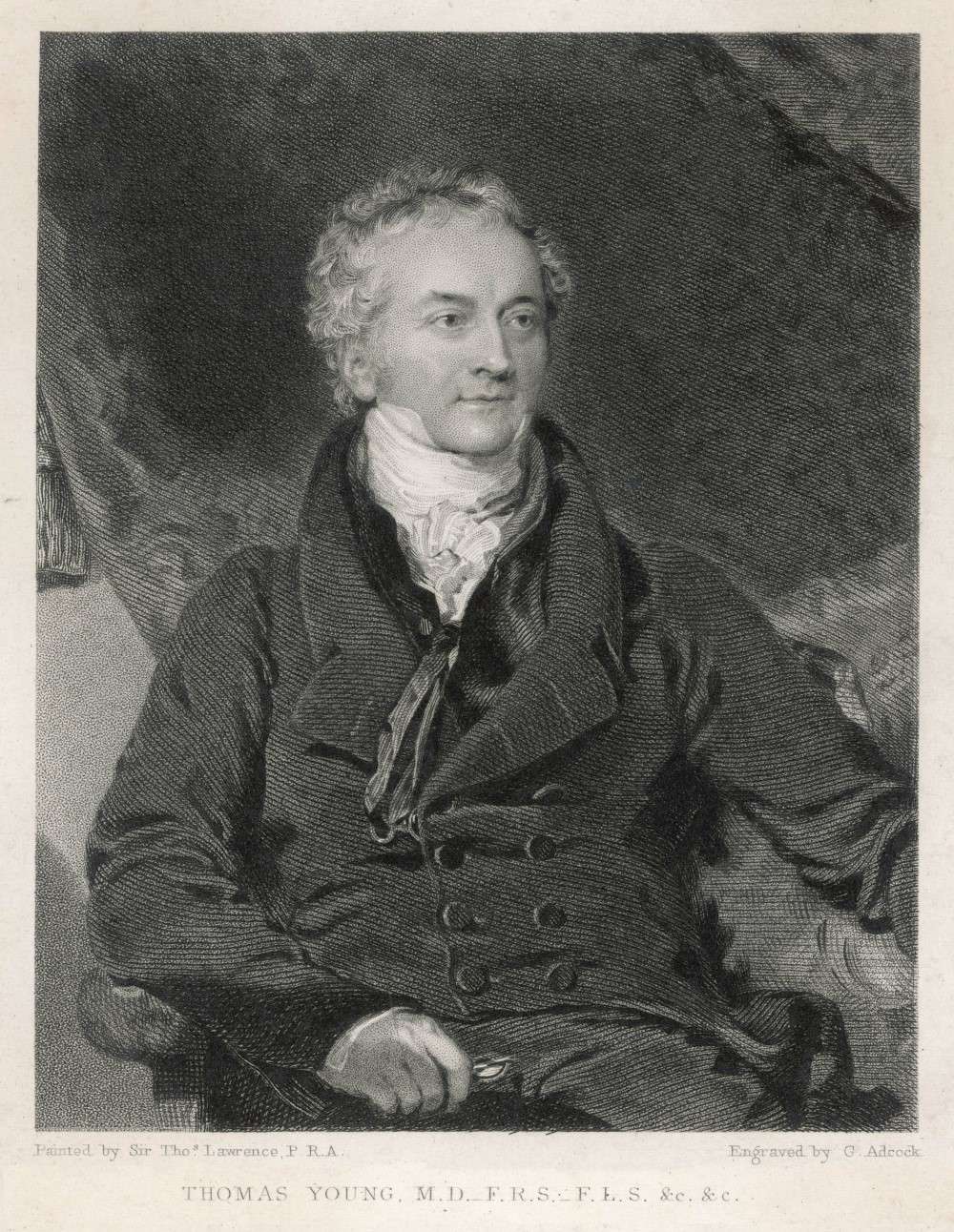 Despite his clear fascination with languages, Young started his medical training in 1792 in London. He then moved to the University of Edinburg and later to the University of Göttingen in Germany where he finished his degree in 1796. His thesis combined his three interests: anatomy, language, and sound. After graduation, he was forced to study additional 2 years at the University of Cambridge as at that time working as a physician in the London area was only possible if you had studied for two years at the same university. Thomas Young himself didn’t find it necessary to attend the lectures at Cambridge on the subject he already had sufficiently studied. Instead, he spent much of his time in his college room writing and making experiments in physics.

At the beginning of 1800, Young left Cambridge and moved to London where he was appointed professor of natural philosophy at the Royal Institution. During his busy years as a lecturer, he also continued his studies on the mechanisms of the eye. He calculated the radius of the curvature of the cornea of his own eye with rather questionable techniques if looking with the today’s standards. His calculations and measurements, however, match surprisingly well with the modern measurements. He studied how the eye accommodates itself to the objects at different distances. Young was also the one that proposed that the eyes’ ability to see colors is due to three different cone types in the eye. His findings were published in a paper titled “On the mechanism of the eye” in 1801.

Probably the most significant works of Young were published in 1801 “On the theory of light and colors” and 1803 “Experiments and calculations relative to physical optics”. In these papers, Young boldly claims that the light is a wave which was in contradiction of the view presented by Isaac Newton that light is composed of particles. Young proved his theories through two experiments. He used water waves to explain interference because they can be simply visualized. In another experiment, which is an early version of a double-slit experiment, Young demonstrated the interference of light which supports the wave theory. Back in 1803, the position of Isaac Newton in the scientific community was almost sacred and thus Youngs’ papers were attacked by anonymous critics. Due to this brutal criticism, Young stated that “With this work, my pursuit of general science will terminate: henceforward I have resolved to confine my studies and my pen to medical subjects only”. Thankfully, Young did not give up his non-medical research but instead published several papers anonymously. Among the work was the description of the elasticity of the material which is nowadays called Young’s modulus. It was stress and strain and shear that lead Young to think about forces that hold the materials together.

The story of a contact angle started from the Young equation

Young’s interest in forces holding the materials together led him to do experimental estimates of the diameter of the molecule. His study of capillary action and surface tension of liquids enabled him to estimate the cohesive forces between water molecules. From these experiments, he calculated the water molecule to be about 0.05 to 0.25 nm. Today we know that the water molecule is about 0.2 – 0.3 nm in size. What makes Young’s estimation even more remarkable is that atoms and molecules were not yet totally accepted as real entities until the turn of the nineteenth century.

Youngs’ work on cohesion and especially the essay titled “An Essay on the cohesion of fluids” published in 1805 mark the beginning of the contact angle. In the paper, he described, in words, the relation between the cosine of the contact angle and the forces that interfacial tensions exert on a liquid droplet deposited on a solid surface [2]. Later, that relationship was expressed mathematically with the equation we know as the Young equation.

From physician to Egyptology

In 1807, came a time when Young decided that he had to concentrate on this medical career if he ever wished to be a physician but also to secure his income.

Young became an M.D. in 1808 and a fellow of the Royal College of Physicians, F.R.C.P. in 1809. In 1811 Young was able to secure that position at the St George’s Hospital but he did not become a pillar of St George’s. Young himself was obviously somewhat disappointed in his relative lack of success as a physician as he avoids the issue almost completely in his autobiography sketch.

During the past few years, his other interest especially that towards ancient Egypt took over the medicine in Young’s life. In 1814 he became hooked on the scripts and languages of ancient Egypt and started to decipher the Rosetta Stone. This he continued until he died in 1829.

This overview is not enough to fully appreciate all the scientific achievements of Thomas Young. If you would like to learn more about his fascinating life, I highly recommend to biography written by Andrew Robinson “The last man who knew everything”.