Emulsions are dispersed systems of two immiscible liquids such as oil and water. Emulsions are found everywhere from food products to crude oil production. Emulsions are formed intentionally to create different type of products from mayonnaise to day creams and paints. But they are also formed as a side product in different industrial processes. When emulsions are wanted their stability is crucial for the quality of the product. In case of unwanted emulsions, the destabilizing agents need to be utilized to break them.

How emulsions are formed?

Emulsion are formed by agitation two immiscible liquids such as oil and water together with the presence of an emulsifier, which can be for example a protein, phospholipid or even nanoparticle. Emulsion can be either oil-in-water (O/W) emulsions where the dispersed phase is oil and the continuous phase is water, or water-in-oil (W/O) type where the phases are reversed. The emulsifier used will determine which emulsion type is formed. Hydrophilic-lipophilic balance of a surfactant is a measure to which degree the surfactant is hydrophilic or lipophilic. Hydrophilic surfactants are water soluble and will work as O/W emulsifying agent whereas lipophilic (or hydrophobic) surfactants are oil soluble and will work as W/O emulsifiers.

How do emulsions break? 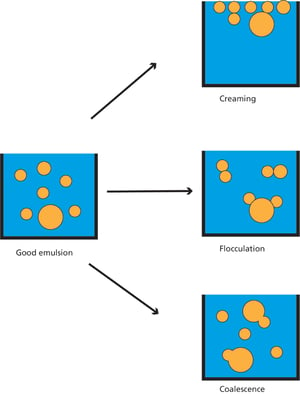 Creaming occurs when the emulsion separates due to a density difference where the lighter oil droplets rise to the surface. Sedimentation follows the same mechanism but happens typically in water-in-oil emulsions where denser water droplets accumulate on the bottom of the emulsion. Creaming or sedimentation can be hindered by having a high viscosity continuous phase.

Flocculation is when the emulsion droplets aggregate and thereby form larger units.

Coalescence is when smaller droplets merge together forming a larger droplet. This occurs when droplets come in contact with each other and the interfacial film is ruptured. Eventually the phase separation will happen.

Ostwald ripening happens when the smaller drops first dissolve in the continuous phase, and then deposit on a larger drops to reach thermodynamically more stable state.

If you would like to hear more about emulsions, and how their stability can be predicted with interfacial rheology measurements, please listen to the pod episode through the link below.

Complex fluid-fluid system can be characterized with interfacial rheology