The basic principle of the Wilhelmy plate method

Wilhelmy plate refers to a thin plate with known dimensions, that is typically used to measure surface or interfacial tension between air-liquid or liquid-liquid interfaces, respectively. The same measurement principle can, however, also be used to measure the contact angle of a plate or a rod.

When the Wilhelmy plate method is used for surface tension measurements, the plate is commonly made of platinum to ensure zero contact angle between the measured liquid and the plate. This leads to cosθ = 1, and the surface tension is then easily solved when the perimeter of the plate is known. 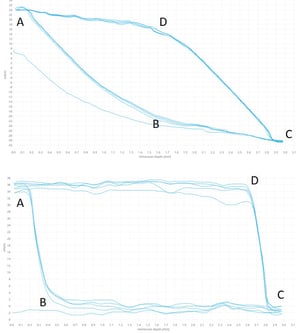 In practice, the curves obtained with the Wilhelmy plate method typically look like the ones on the left. The data collection is started when the sample touches the liquid surface. This point is automatically detected by the software. The first part of the curve (AB) is not used in the contact angle analysis as the meniscus is still forming around the sample. When the meniscus is formed the advancing angle stabilizes. At the point C, the movement is reversed, and again some time is taken for the meniscus to stabilize (from C to D). The shape of the curve depends on the sample measured. The curve above is measured on a rectangular piece of polymer and the one below on thin fiber.

The Wilhelmy plate method gives the advancing and the receding contact angle as well as contact angle hysteresis for the immersed part of the sample.