Analysis of adsorption of biomolecules to solid surfaces is rele­vant in many areas, for example in biomedical engineering and in pharmaceutics, to name a few. Here we show how QSense QCM-D can be used to characterize biomolecular adsorption and desorption dynamics, as well as the amount adsorbed or desorbed from the surface of interest.

QSense QCM-D is a surface sensitive technology for label-free analysis of surface inter­actions and binding. Monitoring changes of mass at the surface as a function of time, it allows you to monitor biomolecular adsorption and desorption to solid surfaces, Fig 1. The time-resolved data also makes it possible to quantify how fast the adsorption/desorption is and how much material that adsorbs to, or desorbs from, the surface. 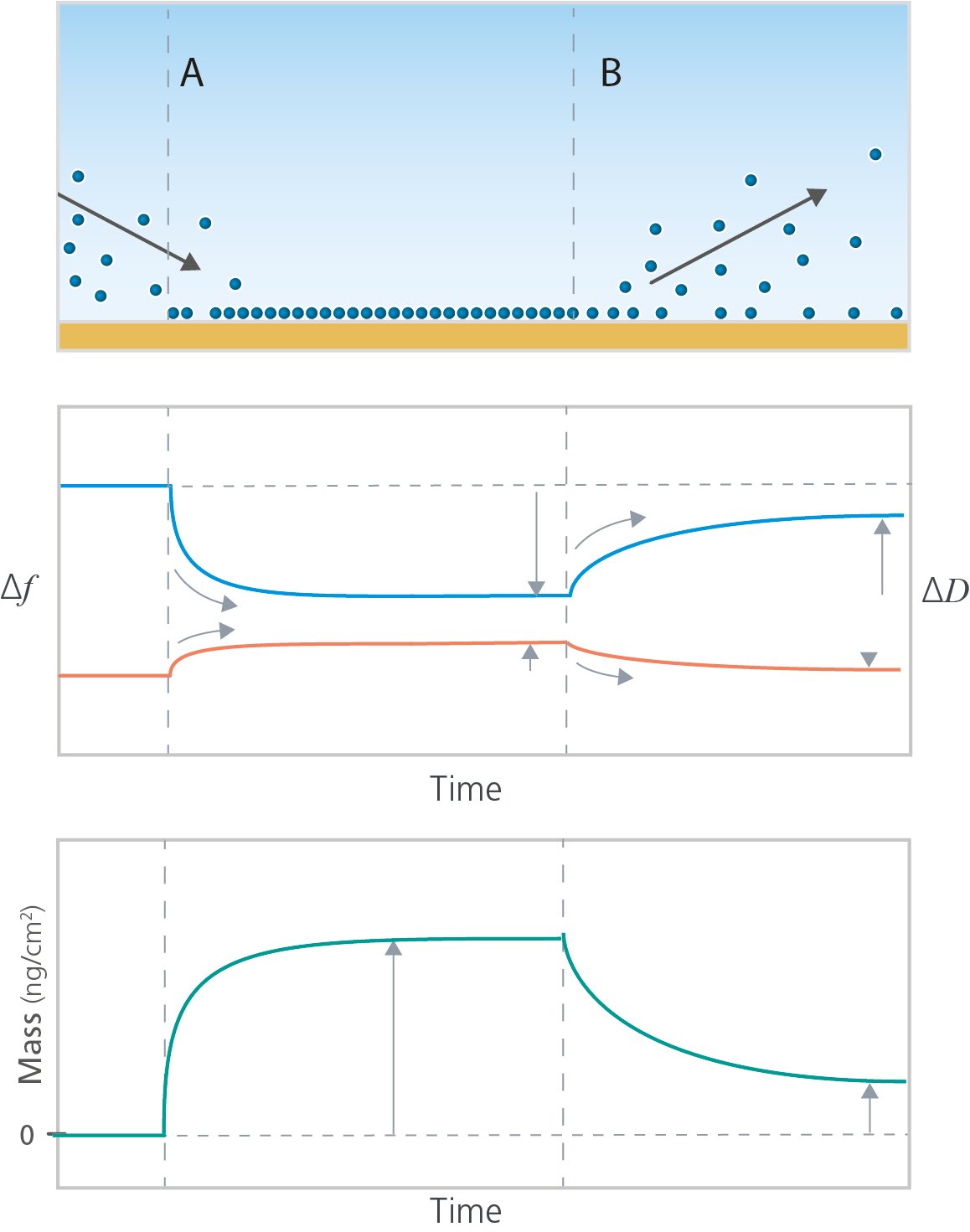 Figure 1. Schematic illustration (top panel) of (A) adsorption and (B) desorption of biomolecules to a surface, characterized by QSense QCM-D (middle panel). The Δf and ΔD data reflect mass change and layer softness respectively. As indicated by the grey arrows in the schematic graphs, the time-resolved data makes it possi­ble to follow the adsorption and desorption, how fast they are, how much material that is added to and lost from the surface. The amount adsorbed to, and desorbed from, the surface can also be analyzed via quantification of the time-resolved layer mass (bottom panel) or layer thickness (not shown)

In addition to sensing changes of mass at the surface, QCM-D also senses the mechanical prop­erties of the surface-adhering layer. This makes it possible to analyze the arrange­ment of the adsorbed biomolecules. For example, is the molecular layer densely or loosely packed? Are the molecules taking a collapsed conformation or do they stretch out from the surface? And is the packing arrangement the same throughout the entire adsorption process, or does it depend for example on surface coverage or any other parameter such as surface material, temperature, salt concentration, or pH?

There are many situations where biomolecular interaction with, and adsorption to, solid surfaces have an important role to play. For example, when designing biomaterials, in tissue engineering, in developing biosensors, and when assessing the interaction between a pharmaceutical drug and storage containers, bags and syringe materials. One tool that can be used to characterize such biomolecular adsorption is QSense QCM-D

QSense QCM-D can, for example, be used to: