Since the beginning of this century, QSense QCM-D has been used to study viruses and virus-interaction with their immediate surrounding. Here we give examples of virus-related research where QCM-D technology has been used.

Insights into virus interaction with its surrounding

QCM-D, which is a surface-sensitive technology, has been used to explore and characterize various aspects of biological systems for more than two decades.1-3  The time-resolved information of mass change at the surface can be used to study biomolecular interactions such as surface-protein, lipid-protein and protein-protein interactions, Fig. 1, and reveal, for example, interaction patterns as a function of molecules, surface and solvent conditions.

An area where such information is useful is in virus-related research. In this field, QCM-D technology has been used to shed light on several different aspects of virus behavior and interaction with the surrounding. Over the years, a vast range of viruses have been studied, for example Norovirus, Poxvirus, Rotavirus, Herpesvirus, Ebola, Hepatitis C and Zika virus. 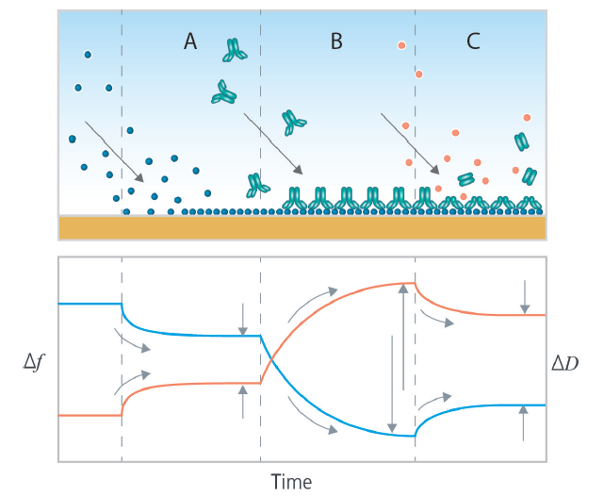 Figure 1. Schematic illustration of how the QCM-D response can be used to reveal biomolecular interactions such as (top panel) (A) adsorption, (B) binding and (C) enzymatic action. The Δf and ΔD data (bottom panel) reflect time-resolved mass uptake and layer softness respectively and can also be used to quantify the layer thickness.

From basic sciences to applied research and development

Examples of virus-related research where QCM-D has been used include:

In the overview below, we have compiled a list of examples of virus-related publications where QCM-D technology has been used. Download the overview to learn more