Considering the ongoing Covid-19 pandemic, and the tremendous negative impact it has had, and still has, antiviral drug development is a highly relevant topic. Here we present two studies where QSense QCM-D technology was used to explore viral membrane disruption and an antiviral strategy towards pandemic preparedness.

The work here presented is based on a review paper, ref [1] and references therein, particularly refs [2-3]. It spans extensive research that has been going on for more than a decade and it builds on several studies. Specifically, we will here focus on two studies mentioned in the review – studies where QCM-D was used as one of the tools to explore a lipid-based platform design for antiviral drug development.

Before we move on to the case examples, let’s start with a bit of a background. The corona virus, Sars-CoV-2, which we are all now very familiar with, is a so-called enveloped virus. Many viral epidemics over the past decade have been caused by membrane-enveloped viruses, for example Ebola and Zika. Therefore, there is a great need to develop antiviral strategies to treat and prevent enveloped virus infections. Ideally, such an antiviral strategy would be broad spectrum, i.e., it would not only target one single virus, but multiple viruses. This would help us deal with both current viruses and make us prepared for future, so far unknown, ones. For an antiviral strategy to work on multiple viruses, you would have to target a feature or characteristic that these viruses have in common. In the case of enveloped viruses, this common feature is the viral envelope.

The viral envelope is a phospholipid membrane-based coating which is necessary for virus structural integrity. It is also critical for viral infection. This means that if this membrane somehow could be destroyed, the enveloped virus would be disabled, or disarmed. There are several antiviral strategies that are targeting the phospholipid membrane. One such strategy is viral membrane disruption. Here, we will briefly present two studies that use QSense QCM-D explore the phenomenon of viral membrane disruption.

Study A: Use QCM-D to analyze membrane−peptide interactions and membrane disruption

One way to induce membrane disruption is to use peptides with membrane-disruptive properties. In this example, which is based on the study in reference [2] they use QCM-D and such a peptide to analyze membrane−peptide interaction and membrane disruption. This study was, however, not made in the context of antiviral strategies, but in the context of creating planar lipid bilayers. At the end of the example, you will see the benefit with this study in an antiviral strategy context.

Planar lipid bilayers are problematic to form on certain solid substrates, such as Au and TiO2. In this study, the goal was to explore if a peptide, with membrane-disruptive properties, could be used to force vesicle rupture to form bilayers on such substrates. Specifically, the authors wanted to characterize membrane − peptide interactions and vesicle rupture on the mentioned Au and TiO2 substrates, and they used QCM-D to explore and answer the questions

To answer the questions above, QCM-D experiments were designed according to the following - the surface materials of interest, Au and TiO2, were exposed to small POPC vesicles, followed by two rinse steps. Next, the surface adhering lipid structures were exposed to a peptide with membrane disruptive properties, an amphipathic α-helix (AH) peptide. This was then followed by two rinse steps.

QCM-D measurement data for two experiments, POPC only and POPC followed by AH-peptide, on the respective two surfaces Au and TiO2 are shown in Fig. 1 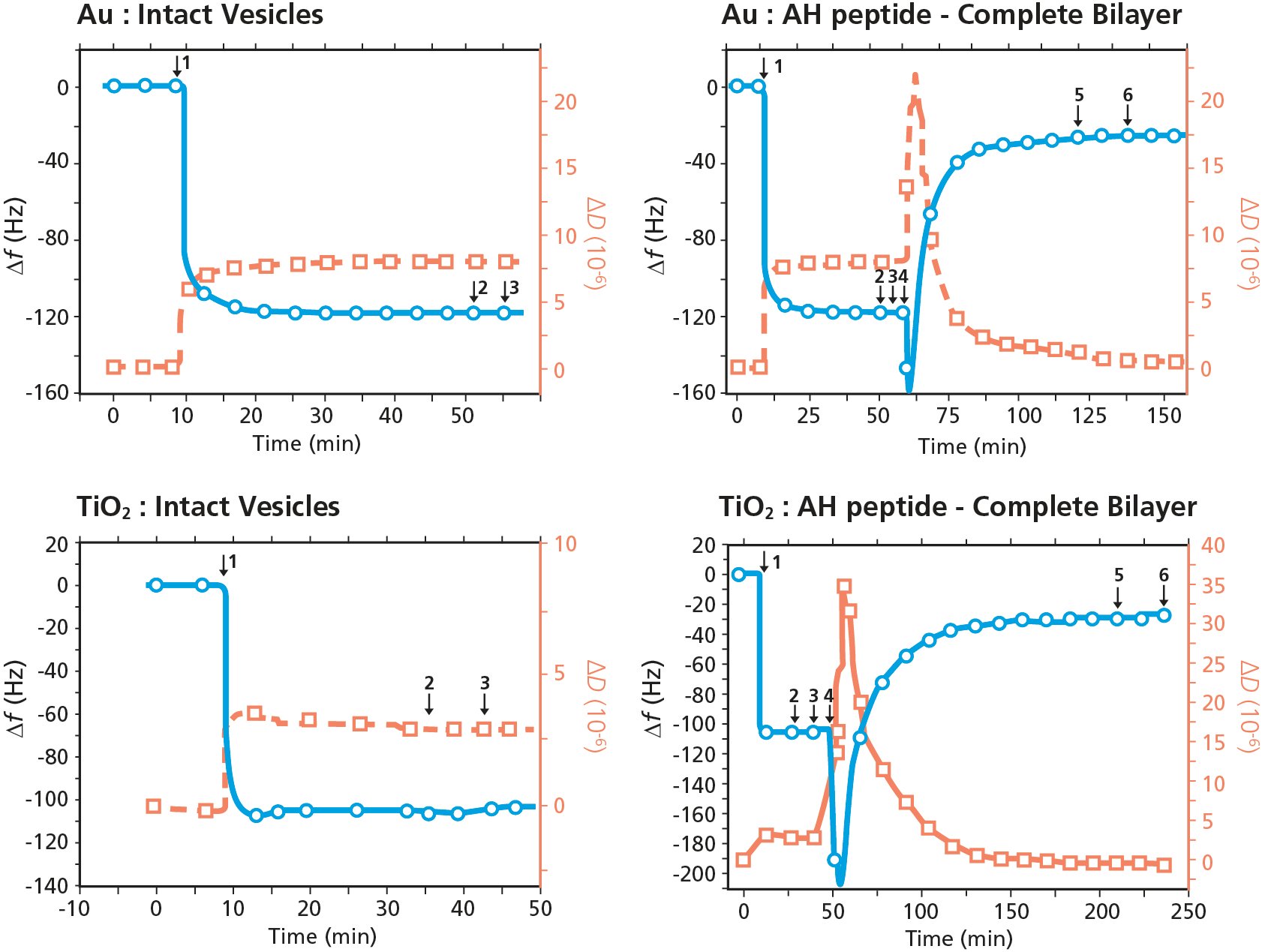 Vesicle adsorption to Au and TiO2

Looking at the data of the two left graphs in Fig. 1, it is noted that the vesicle introduction on both Au and TiO2 results in a large and distinct decrease in Δf and a corresponding increase in ΔD. This behavior is a characteristic signature of vesicle adsorption and the formation of a layer of intact vesicles at the surface.

In the two graphs to the right, the measurements again start with vesicle introduction, resulting in the formation of layers of intact vesicles on both Au and TiO2. Then, after two buffer rinses, AH peptide is introduced (step 4 in Fig. 1, right). The addition of AH-peptide results in decrease in Δf and increase in ΔD, followed by abrupt increase in Δf and abrupt decrease in ΔD. The response indicates that the AH peptide initially interacts with the intact vesicle layer, resulting in a mass uptake. Next, the peptide induces vesicle rupture, showing as distinct mass loss and the characteristic signature of vesicle rupture and fusion to form supported lipid bilayers on both surfaces. I.e., the addition of AH-peptide results in vesicle rupture and fusion to form planar bilayers on both Au and TiO2.

The study shows that high quality lipid bilayers easily can be formed on materials where this previously was not so straight forward. Another relevant takeaway from this, and similar studies, is that surface-adsorbed lipid vesicles can serve as a useful model system for enveloped virus particles. Such a model membrane platform, which mimics the enveloped virus particles, can be used to explore, for example, membrane−peptide interaction, and to analyze rupture of the viral envelope in various contexts. Several studies have been made using QCM-D in combination with this viral-membrane-mimicking platform to explore the rupture-efficiency and various aspects of this model system. In study B, below, the researchers used this viral-membrane mimicking platform to evaluate the influence of vesicle size.

Study B: Using QCM-D to analyze rupture of lipid vesicles by a Broad-Spectrum Antiviral Peptide and the influence of vesicle size

The size of virus particles varies. For example, mosquito-borne viruses, such as Zika and Dengue, are approximately 50 nm diameter, and coronaviruses, such as MERS and SARS-CoV-2, are typically ~100 nm diameter. It is therefore important to understand the size dependence of the rupture efficiency to know which viruses that could be deactivated with a specific antiviral peptide. In this example, which is based on the study in ref [3], the authors scrutinized the peptide-induced vesicle rupture kinetics, and the influence of vesicle size. Specifically, they used QCM-D to explore and answer the following questions

To answer the questions above, QCM-D experiments similar to the ones in study A were designed. Au sensors, which are known to result in adsorption of intact vesicles, were exposed to POPC vesicles of different sizes, ranging from ~58 nm - ~925 nm in diameter. Next, the intact vesicle adlayers were exposed to the amphipathic α-helix (AH) peptide.

Measurement data for three representative experiments of vesicles adsorption to Au and subsequent exposure to AH-peptide are shown in Fig. 2. Each of the graphs A, B and C represent a vesicle size category, 'small', 'medium' and 'large'.

The Au surfaces are exposed to vesicles of different sizes, and like the results in study A, we note the characteristic signature vesicle adsorption and the formation of close-packed, intact vesicle adlayers, Fig. 2. The magnitude of the Δf and ΔD shifts differ between Figs. 2A, B and C which reflect the vesicles size; the larger the vesicle diameter, the larger the magnitude of the shifts.

Influence of vesicle size on binding interaction of AH peptide

When the respective vesicle layer was exposed to AH-peptide, three categories of vesicle – peptide interaction kinetics were observed, each behavior shown by the representative graphs in Figs. 2A, B and C. The category 'small' vesicles, Fig. 2A, vesicles where Ø < 80 nm, showed a complete vesicle rupture and formation of a planar bilayer. This is the same behavior that was observed in study A. The introduction of the AH-peptide results in an initial interaction with the intact vesicle layer, as revealed by a decrease in Δf and an increase in ΔD, whereafter the characteristic signature of vesicle rupture and fusion are observed. In the category 'medium' sized vesicles, where the vesicles are in the size range 94 < Ø < 161 nm, Fig. 2B, incomplete vesicle rupture was observed. The decrease in Δf and increase in ΔD shows that there is some interaction of the peptide with the intact vesicle layer. Thereafter, there is some vesicle rupture, as indicated by a slight increase in Δf and a corresponding decrease in ΔD. The third category is that of 'large' vesicles, vesicles Ø > 241 nm. The data, Fig. 2C, shows that there is minimal vesicle rupture in this category, and that the predominant event observed is AH peptide binding.

The study shows that there is a size dependent peptide - membrane interaction behavior, and three categories of interaction kinetics are observed. As all publications discussed in this overview, this work includes much more detailed analysis than here described. One of the key conclusions mentioned in the study is that the AH peptide may target enveloped viruses up to 160 nm diameter.

A large fraction of recent epidemics has been caused by membrane-enveloped viruses, and there is a great need to develop antiviral strategies to treat and prevent such virus infections. Even though the vaccine development was incredibly fast this time, the losses of lives, health and wealth have been major. And, perhaps some, or all these losses could have been avoided had we been better prepared.

This case example was based on a review paper that addresses the development of broad-spectrum antiviral drugs, which would help us towards pandemic preparedness. The review discusses that the viral envelope is an opportune target for broad-spectrum antiviral strategies. It expands on several approaches to these viruses by targeting the viral membrane, and one of the strategies discussed is viral membrane disruption via the usage of peptides with membrane disruptive properties.

In the exploration and development towards such antiviral solutions, surface sensitive technologies, combined with viral-membrane mimicking platforms, are useful. One example is QSense QCM-D technology in combination with surface-adsorbed vesicles. This setup has been used in several studies to evaluate the membrane-disruptive properties of different antiviral peptides, and to assess various membrane architectures. These studies are leading the development of next-generation antiviral strategies, that might not only work against current enveloped viruses, but which may also prepare us for future ones.

The sensitivity distribution at the QCM crystal surface

Read about the QCM mass sensitivity distribution, what it looks like and how it affects the quantification of the data.

Read this case example where QSense QCM-D was used to analyze the interaction between a ceramic surface and different slurry additives.

QCM vs QCM-D - what is the difference?

Compared to QCM, QCM-D measures an additional parameter, and provides more information about the system under study.

Read about the differences and similarities in information output between QSense QCM-D and standard SPR.

Learn about how QSense QCM-D is used to monitor vesicle inter­action with solid substrates and to characterize surface-adsorbed vesicle layers.