QSense QCM-D technology enables real-time monitoring of vesicle inter­action with solid substrates. Here we describe what information QCM-D measurements reveal, and how this analysis is typically used in the context of vesicle-surface interaction.

The characteristic QCM-D signatures of vesicle adsorption and vesicle rupture

In 1998,1 Keller and Kasemo showed that adsorption of intact vesicles to solid substrates is easily identified by QCM-D measurements. The vesicle adsorption fingerprint, which is schematically illustrated Fig 1, shows a characteristic signature in f and D. The large shifts in both f and D indicate that there is a large mass uptake and that the formed layer is very soft, as is the case of an adlayer constituted by vesicles.

As described for example in this post, QCM-D measures what is often referred to as “hydrated mass”, i.e., the mass of not only the molecules interaction with the QCM sensor surface, but also the mass of the associated solvent. This makes the technology particularly suitable to unveil structure and structural changes, such as vesicle rupture. So QCM-D measurements can readily reveal the vesicle-surface interaction dynamics, if the vesicles adsorb intact, and if they stay intact over time or if they rupture, for example when the ambient change or if they are exposed to disruptive components.

Vesicle-surface interaction and surface-adsorbed vesicle platforms are typically analyzed in situations where complex lipid mixtures are of interest, if the vesicles are functionalized with e.g., proteins or if specific surface material of the solid support are explored. QCM-D is for example used to (Fig. 2) 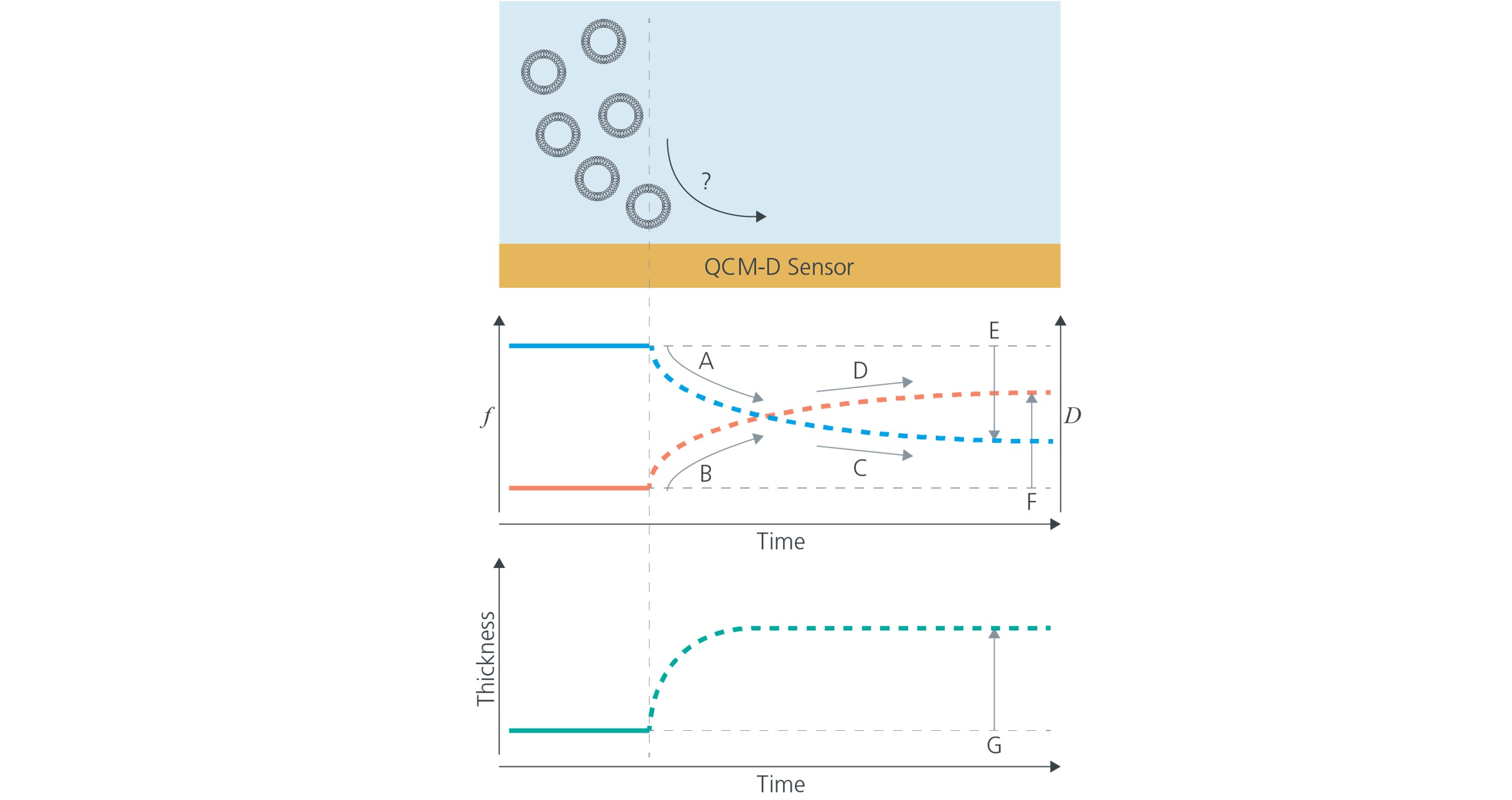 For example, Cho et al2 used QSense QCM-D as one of the tools to explore if a peptide with membrane disruptive properties could be used to force rupture of surface adsorbed vesicles. The goal was to develop an easy and straightforward method to create high quality lipid bilayer on surfaces such as Au and TiO2, where lipid bilayer formation traditionally was problematic. The characteristic QCM-D signature revealed both the expected adsorption of intact vesicles to the Au and TiO2 surfaces, as well as the interaction of the peptide with the surface-adsorbed vesicles followed by vesicle rupture and fusion. The study proved that high quality lipid bilayers indeed could be created on both surfaces using the so-called AH-peptide.

As demonstrated in the nice study by Keller and Kasemo in 19981, QCM-D is a powerful tool to explore and characterize lipid – based systems such as vesicle surface interaction dynamics and the properties of surface adsorbed vesicles. The technology is typically used to answer questions related to the how’s and the why’s of vesicle-surface interaction. An example of ongoing work is where QSense QCM-D is used in combination with surface-adsorbed vesicles as a viral-membrane mimic, to explore new antiviral strategies.3, 4

The sensitivity distribution at the QCM crystal surface

Read about the QCM mass sensitivity distribution, what it looks like and how it affects the quantification of the data.

Read this case example where QSense QCM-D was used to analyze the interaction between a ceramic surface and different slurry additives.

QCM vs QCM-D - what is the difference?

Compared to QCM, QCM-D measures an additional parameter, and provides more information about the system under study.

Read about the differences and similarities in information output between QSense QCM-D and standard SPR.