Surface sensitive and time-resolved technologies, such as QCM and SPR, are often compared. These technologies do have a lot in common, but there are also key differences. Here we present a brief overview and compare the information output from QSense QCM-D with that from a standard SPR.

Without going into detail on how the respective technology work, as this is abundantly described elsewhere, QCM is an acoustic technology and SPR an optical one. In brief, QCM measures resonance frequency changes, f, of an oscillating quartz crystal, while SPR measures changes of the surface plasmon resonance angle, ϴ. The resonance frequency of the crystal oscillation is sensitive to mass changes, and the SPR angle is sensitive to refractive index changes. In addition to f and ϴ, additional parameters may be captured by the respective technology, which then expands the amount of information that the technology can extract.

Below we give examples of typical differences in information output between QSense QCM-D, which is an extended version of QCM, and a standard SPR.

QCM-D and SPR both, directly or indirectly, senses relative changes of mass coupled to the surface. The masses sensed are however different and are often referred to ‘acoustic’ and ‘optical’ mass, or ‘hydrated’ and ‘non-hydrated’ mass. The reason for this difference is due to the different physical principles by which the coupled mass is measured. The mass-uptake estimate from SPR data is based on the difference in refractive index between the adsorbed biomolecules and water displaced by the biomolecules upon adsorption. This means that water associated with for example a protein film (e.g., the hydration shell) is essentially not included in the mass determination. In contrast, changes in frequency acquired with QCM-D measure water coupled as an inherent mass via direct hydration, viscous drag and/or entrapment in cavities in the adsorbed film. Consequently, the SPR response is proportional to the coupled ‘molar mass’, while in QCM-D measurements the layer is essentially sensed as a ‘hydrogel’ composed of the macromolecules and coupled water.

The QCM-D mass can be calculated or modelled, if the data and adsorbed layer fulfills the model requirements and conditions. The SPR mass can be calculated by multiplying the angle shift with a proportionality constant which is unique for the adsorbed species, and which must be calibrated independently [see ref 1, and references therein].

QCM-D, being an acoustic technique, allows measurement of thicker films, while SPR, being an optical technique, has greater limitations concerning the film thickness.

As discussed in the section about mass, QCM-D senses both molecules and coupled solvent while SPR only senses the molecules. Due to this characteristic, QCM-D will sense macromolecular reorganization and conformational changes via changes in water content, phenomena not detectable with SPR.

The coupled water sensed by QCM-D can also serve as a signal enhancement, for example in small conformation changes where the amount of coupled solvent will be significantly different.

While QCM-D measures two parameters, traditional SPR only measures one. The additional information contained in energy dissipation data from QCM-D enables a more detailed interpretation of the surface interaction and reaction processes.

Changes in the dissipation are related to the shear viscous losses induced by the adsorbed layers, and thus provide information that can help the identification of structural differences between different adsorbed systems, or structural changes in the same type of molecule during the adsorption process. From the combined f and D data, layer properties and viscoelastic info, which can be related to conformation/structure/orientation, can be characterized.

Both technologies monitor time-resolved mass changes, and the ability to evaluate kinetics is quite similar for QCM-D and SPR from a technical point of view. However, due to the differences in what the methods sense, SPR technology is the stronger method in terms of kinetics and affinity characterization. Where QCM-D is more sensitive for water-rich and extended layers, SPR systems are very sensitive to refractive index changes near the surface, which is favorable in this context. In addition, SPR sample cells, in general, have a smaller volume than QCM-D sample cells, which is beneficial from a mass transport point of view. Thanks to this, SPR has over the years become a standard technology for characterization of kinetic rate constants affinity constants.

QCM-D and SPR are two surface sensitive real-time technologies with overlapping application areas and which at a first glance may appear very similar. Similarities do exist, but there are also differences that may be critical depending on the scientific question asked or the experimental needs. Overall, the acoustic QCM-D and optical SPR are complementary, but there are applications for which one or the other may be more suitable. In this overview, we have presented the key differences regarding the information output from the respective technology. 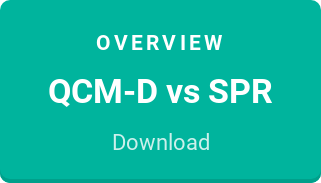