Surface pressure—area isotherm or π-A isotherm can be defined as a measurement at constant temperature of surface pressure, as a function of the available area for each molecule in a floating monolayer i.e. Langmuir film.

The most important indicator of the monolayer properties of an amphiphilic material is found by measuring the surface pressure as a function of the area of water surface available to each molecule. Usually, an isotherm is recorded at constant temperature by compressing the film with the barriers at a constant rate while continuously monitoring the surface pressure. Depending on the material, repeated compression and expansion may be necessary to achieve a reproducible trace.

Different phases in the isotherm

When the monolayer is compressed a number of distinct regions or phases can be seen on an isotherm. The phase behavior of the monolayer is mainly determined by the physical and chemical properties of the amphiphile, the sub-phase temperature, and the sub-phase composition. For example, various monolayer states exist depending on the length of the hydrocarbon chain length and the magnitude of other cohesive and repulsive forces. Increased chain length increases the attraction between molecules and condenses the π-A-isotherm. On the other hand, if an ionizable amphiphile is used the ionization of the head groups induces repulsive forces that oppose phase transitions. 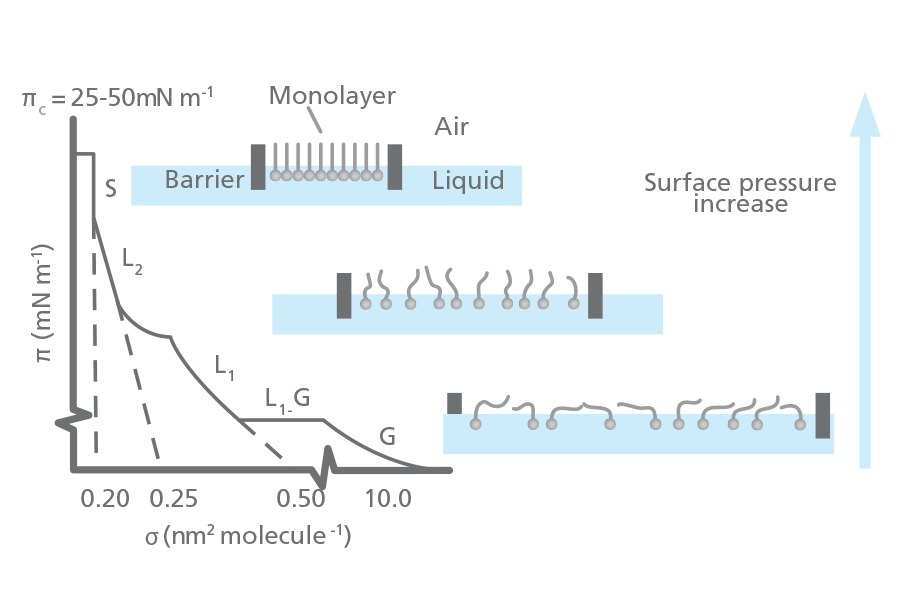 A simple terminology used to classify different monolayer phases of fatty acids was proposed by W.D. Harkins in 1952. The monolayers mostly exist in the gaseous state (G) and on compression can undergo a phase transition to the liquid-expanded state (L1). Upon further compression, the L1 phase undergoes a transition to the liquid-condensed state (L2), and at even higher densities the monolayer finally reaches the solid state (S). If the monolayer is further compressed after reaching the S state the monolayer will collapse into three-dimensional structures. The collapse causes a rapid decrease in the surface pressure; this is seen as a horizontal break in the isotherm if the monolayer is in a liquid state.

There are also many other critical points in a π-A-isotherm, such as the molecular area at which an initial, pronounced increase in the surface pressure is observed, Ai, and the surface pressures at which phase transitions occur between the L1 and L2 state and the L2 and S state.

If you would like to learn more about surface pressure - area isotherms, and how to utilize them, please register for KSV NIMA user days. 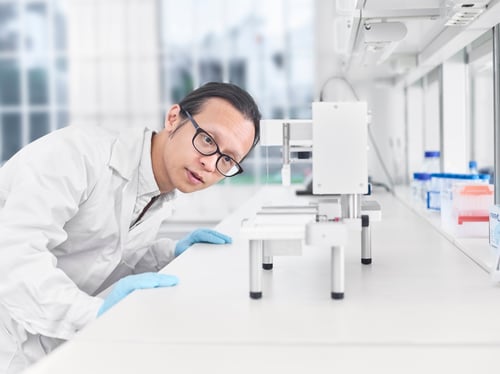 Use the link below to see the agenda and register! 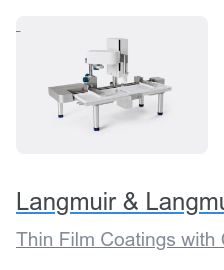 What is a Langmuir-Blodgett film?

A Langmuir-Blodgett film can be defined as one or more monolayers of material deposited from a liquid surface onto a solid substrate.

The versatility of polyelectrolyte multilayers, PEMs, is high, which makes them interesting for e.g. biomedical applications. The functionality is largely determined by the layer properties, which needs to be understood to be tailored. Here, we show how PEMs can be characterized with QCM-D.

How to measure crosslinking and collapse with QCM-D

Polymers and polyelectrolytes of various conformations are used in many applications where there is a need to tailor the interfacial properties to promote a certain interaction with the surrounding environment. Here we show how polymer layer crosslinking and collapse can be characterized.

QCM-D mass and thickness - How to measure

Read about how molecule-surface interaction processes and binding can be characterized by QCM-D via time-resolved measurements of mass and thickness.

How to measure swelling of thin films with QCM-D

The ability to take up and release water is central for many materials, such as hydrogels, whose function depend on the ability to hydrate and dehydrate. Hydration and swelling are also central when dealing with hygroscopic materials. QCM-D can be used to characterize such swelling phenomenon.

Thin-film degradation and material desorption is sometimes wanted and sometimes not. Learn about how it can be characterized by QCM-D.